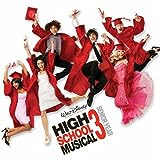 Stars: 4 out of 5
Pros: Several more fun songs
Cons: A couple are just okay
The Bottom Line:
Last franchise soundtrack
Mostly good, a couple bad
But fans will want it


"Step Into the Future, but Hold On to High School Musical."

No one really expected the High School Musical movies to become the phenomenon they are, but here we are talking about the soundtrack to the third installment, subtitled Senior Year.  Yes, the plot of the movie revolves around the original cast dealing with their upcoming graduation.  And that carries through to the songs as well.

Stylistically, this disc covers a similar ground to the first two.  While most of it is radio friendly pop, the pop is dosed with rock and hip hop and even a bit of Broadway at times.  That makes for some while swings between songs, but it holds together well over all.  And the cast pulls it off just fine.

Several of the songs deal with the big events of senior year.  Since characters and are on the basketball team, the first track is set around their championship game.  No, I don't know of any teams that sing together during the second half of a game they are losing, but it makes for a fun song.  "Now or Never" sounds like a boy band song - pop with just the barest hint of hip hop.  While the song loses a bit of the fun without the visuals, it's still a great upbeat start to the disc.  Trust me; you'll be nodding your head before you know what hit you.

Another of the senior year songs is "A Night to Remember."  This song takes on prom, and it's quite funny.  It shows how excited the girls are about the upcoming dance while the guys are dreading it.  Listening to the two viewpoints juxtaposed is very funny.  And you can even hear some sarcasm in the guy's voices if you listen closely.  While I wouldn't call it a full out hip hop song, it does get close a couple times.  It's still mostly teen pop.

With the last track, I complained about Sharpay's songs.  Here, she only gets one, a duet with her brother Ryan.  Frankly, I find "I Want it All" to be lots of fun as the two dream about their successful show biz life.

Speaking of duets, and get their own song this time around.  "The Boys are Back" celebrates their friendship as they think about the fun they've had together over the years.  Again, we've got the boy band vibe going on.

But the majority of the songs go to main characters and Gabriella.  They both get a solo.  Gabriella's is "Walk Away" a mid tempo pop number about how she plans to deal with the upcoming separations.  Meanwhile, faces his frustration at choosing a college and major by singing the rock anthem "Scream."

And they get three love duets.  Frankly, I like all three of them.  But I love "Can I Have This Dance."  It's a mid-tempo ballad that also works as a fast waltz.  This one has the most variety in the musical instruments.  Yes, it has the guitar and keyboard all the other songs have, but it introduces some strings.  It sounds beautiful, and the lyrics are great, too.  Honestly, give it a few years (for the kids who have made these movies a hit), and I'd bet you anything this starts showing up as the first dance at weddings.

"Senior Year Spring Musical" is a greatest hits of this soundtrack.  After a few seconds of a new introduction, various members of the cast perform several songs that have already been done.  But they spice things up by having different cast members singing the songs.  Still, it is skipable.

And speaking of skipable, there's the Graduation Mix of "We're All in This Together."  I was never a fan of the original from the first soundtrack, and this version doesn't help matters.  They take the pop number, slow it down, and make it a choral piece.  Not my first choice by far.

Finally, there's "High School Musical," the closing anthem.  All of the closing anthems feel like the curtain call of a Broadway show, and this isn't an exception (they even bow at the end of this movie.)  It's another upbeat pop, although this one is straight up pop.