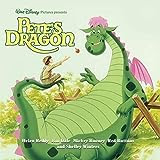 Stars: 4 out of 5
Pros: Many fun songs
Cons: Completely out of order
The Bottom Line:
Songs out of order?
Who decided to do that?
It's just plain stupid


So Close to "Brazzle Dazzle"

I don't remember for sure how old I was when I first saw Pete's Dragon, but I fell in love with it the first time.  And one reason was the songs.  The soundtrack includes so many fun songs.  So when Disney finally released the soundtrack from the vault a few years back, I didn't hesitate to buy it.  Unfortunately, it's not quite as perfect as I would expect it to be.

Of course, the best known song from the soundtrack is "Candle on the Water," a lovely piano ballad that star Helen Reddy sings as Nora.  (We won't go into how the TV version I saw as a kid edited the song out completely.)  The song absolutely soars as Nora sings of how she will be faithful to her long lost love.

But that's just the start of the great songs here.  My favorite song has always been "Brazzle Dazzle Day," a song that Nora, Lampie (Mickey Rooney) and Pete sing during a happy moment in the song.  While there is a full orchestra behind them, I will admit to getting a 70's vibe from the song.  That makes since considering the movie was released in 1977.  But I'm not sure what it is about this song that screams 70's so much.

Another favorite I was thrilled to get here was "There's Room for Everyone."  Again, Nora and Pete sing this one to convince the kids in town that having a dragon around isn't so bad.  It's got a catchy melody and rich orchestration.

Of course, the catchy melody can also be the curse of this soundtrack.  The villains of the movie have some songs as well.  The abusive Gogan family (led by Shelley Winters and including Jeff Conaway) have a couple of very catchy songs.  In fact, they have the first song, "The Happiest Home in These Hills."  In terms of story, it's perfect because we get to see how they really treat Pete, the orphan they've bought.  Then there's "Bill of Sale" in which they try to get him back from Nora.  In the context of the movie, these are both great songs I enjoy.  But I tend to get them stuck in my head above all the others from the movie.  You can imagine how embarrassing it is to find yourself singing "'Watch out or I'll take you apart.'/'We'd like to see you try it.'"

The same applies to the other villains, Doc Terminus and Hoagy, as played by Jim Dale and Red Buttons.  "Every Little Piece" discusses how much money they intend to make from the parts of Elliot, the dragon.  (Dragon parts are good for phony medicine, you know.)

This is a soundtrack, so most of the songs include full orchestration.  Outside of "Candle on the Water," all the songs are upbeat with catchy melodies.

But the real problem comes with the way the songs are presented here.  I suspect they took the original record, remastered it (and it does sound nice) and put it out on CD without any additional thought behind it.  What do I mean by all this?  First, the songs are in random order.  Yes, all the songs from the movie are here.  But they aren't in the order they appear in the movie.  The first song is actually sixth, while the famous "Candle on the Water" is first instead of in the middle.  I think this is the first time I've seen a soundtrack in random order like this.

Worse yet, some of the songs are cut.  All the songs with extended dance sequences have the instrumental portions cut out.  (Yet the disc does open with the beautiful Main Title orchestra piece.)  On a few of the songs, the cuts are done well enough that it's really hard to tell.  Not so with "Happiest Home in These Hills."  There's a noticeable jump.  The other noticeable edit is in "Passamashloddy."  Or should I say edits.  All the dialogue, and it's rather funny, is cut out.  And even in the middle of the singing, one of Hoagy's lines is cut even though Doc Terminus' response is still there.

The Pete's Dragon soundtrack is so close to being perfect.  So many of these songs are just plan fun.  But the track order and the cuts are frustrating to say the least.