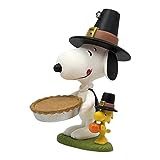 Stars: 5 out of 5
Pros: Great concept and a perfect execution will make your mouth water
Cons: Doesn’t hang correctly on the stand (yet again)
The Bottom Line:
Celebrate this month
November’s favorite pie
Sure looks delicious


As November Comes, We Pause for Giving Thanks

Snoopy has always been the most popular member of the Peanuts gang, so it’s not really that surprising he’s in four out of the twelve pieces in the monthly Peanuts ornament series Hallmark is releasing this year.  What is a little surprising is that he waited until the fourth entry to show up for the first time.  But he (and ) make a grand entrance with Giving Thanks.

This ornament is simple but so much fun.  It features Snoopy dressed in a Pilgrim hat and a cape.  His hands are outstretched because he is holding a pumpkin pie.  And he’s obviously ready to dig in because he’s grinning and his tongue is sticking out of the side of his mouth like he’s licking his lips.

usually accompanies Snoopy in these ornaments, and this one is no exception.  He’s standing at Snoopy’s feet also dressed in a Pilgrim hat.  Don’t worry, it’s size appropriate.  Instead of a pie, is holding out a small pumpkin.

Between the two, it’s enough to get you ready for Thanksgiving dessert.  I love pumpkin pie, and this definitely makes my mouth water.  No, I’m not licking my lips, but I sure can sympathize with Snoopy.

I think last year’s Thanksgiving ornament might have been a better initial match for this series with its obvious tie in to the special A Charlie Brown Thanksgiving.  However, that doesn’t make this one any less fun.  I plan to display both of them side by side every year anyway.  There is certainly a similarity with Snoopy standing there in a Pilgrim hat, but I don't mind.

Speaking of displaying, I will be setting this one on the Happiness Is… stand that Hallmark is selling separately.  The background for this one is grass with autumn leaves behind it.  I’d rather it have a table with food on it or something, but this works as well.  And it is simple enough that the ornament stands out, which is important.  Snoopy and are standing side by side with grass under them, so the ornament has a nice wide base and stands up no problem.

If you want to hang the ornament, you can do so by using the loop sticking out from Snoopy’s hat.  The ornament tips forward a little bit, but not as badly as the one from last years does.  Once again, if you try to hang Snoopy on the display stand, he turns to the side.  However, since I want to display two ornaments side by side, that isn’t a problem for me here.

Snoopy’s first appearance in the Happiness is Peanuts All Year Long series is great and proving to be pretty popular, too.  Track down Giving Thanks before they all disappear.  You’ll be thankful you did.