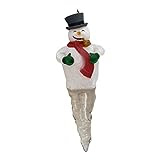 Stars: 5 out of 5
Pros: Fun idea perfectly executed
Cons: Takes a few looks to fully appreciate
The Bottom Line:
A cool idea
Executed perfectly
Off to a great start

Snowman Makes a Cool Start to a New Icicle Series

Hallmark has started several new ornament series this year, and the most unique is the Cool Icicles series.  It will feature a different winter/Christmas character on top of an icicle.  And up first is a snowman.  Shocking, I know.

The ornament really consists of two parts.  The upper part is the snowman himself.  And he looks pretty much like you'd expect a snowman to look.  He's got a black top hat (really almost charcoal gray), an orange nose sticking out, two black eyes and a black coal smile interrupted by his pipe.  He has a red scarf hanging down from his neck to give him color and two green mittens.  The majority of his body is glittery white.

The bottom half is the icicle.  It is completely clear, although had can see a big air bubble inside.

I will admit this ornament took a few looks to grow on me.  But each time I went back in the store to have another look, I found I liked him a little more.  The glitter on his face made him look a little mean at first glance, but now I can't see it any more.  Instead, he looks cute.

And I'll let you in on a secret.  He is going to look great on a Christmas tree.  I have a string of white lights I keep out year round, and when I nestled him in that, the clear part glowed and the glitter reflected the light perfectly.  I can only imagine who he will look with colored lights, and I can't wait until December to find out.

After I got him home, I noticed a notch on his hat I thought might be a flaw.  But as I've looked at others, they all have it, too, so this makes me think it is a feature.  And, really, if you have an old hat, isn't that what you'd use for a snowman?  It's a fun little quirk.

Since the ornament comes to a point on the bottom (don't worry, it's not a sharp one), he won't stand up at all.  But really, wouldn't you want to hang an icicle anyway?  That's where the ring on top of his hat comes into play.  It's off to the right side, but even so he hangs straight.

Yes, there is a 1 in a Christmas tree, denoting that this is the first in the series.  It's small and well hidden.  I'll let you find it on your own, but it is in the perfect spot.

The more I look at this snowman, the more I like him.  I can't imagine all the different characters they could use for this series, but I can't wait to find out.  If they continue to do them well, I think Cool Icicles will be a fun series.

And if you like this fun idea, you'll want to check out the rest of the Cool Icicles Series.