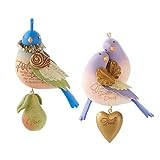 Stars: 5 out of 5
Pros: Two beautiful ornaments at original box price
Cons: Does hurt secondary value of those with original release
The Bottom Line:
Restarting twelve days
With two stunning ornaments
Don’t miss it this time

In 2013, Hallmark did something they haven’t done in decades – re-release the first two ornaments in one of their official series.  Oh, they’ve re-released some ornaments or released ornaments as repaints, but what they did with the catch up release for the Twelve Days Of Christmas was unique.

This set features the Partridge in a Pear Tree and the Two Turtle Doves, the two entries in this series that have been released over the last two years.  Since this is year three of the series, you can buy Three French Hens separately and be all up to date.  While Two Turtle Doves is identical to the one released last year, the copyright date on the Partridge is 2013.  That’s a small conciliation to the collectors who did buy the original release in 2011 since the value of their ornament will fall as a result of this set.

The ornaments themselves are stunning.  There’s a reason this is my favorite series going at Hallmark right now.  The Partridge is done in dark blue, tan, and light green while the Turtle Doves are more of the light purple and pink and their bodies wind around each other.  The wings on both ornaments feature musical notes, and the words of their verse in the song on written on their bodies in calligraphy.  Each ornament has a dangle element as well – a pear for the Partridge and a heart for the Turtle Doves.

These are definitely not for everyone, and I can see why people might be put off by the series.  They are not your traditional birds in coloring or design.  In fact, when I saw the first picture of the first one, I didn’t like it.  However, when I saw him in person, I changed my mind in two seconds.  These ornaments are stunning in person.  The design elements gives them a decoupage flair that you wouldn’t expect but actually does work.  Instead of being realistic, they go for the artistic.  And the results really do work well.

Because of the dangle, these ornaments are designed to be hung only.  However, they both hang straight or at least straight enough that only the most picky would notice they aren’t hanging straight.

And don’t worry.  These two ornaments are the only ones that will have the correct number to go with the song.  The rest of the ornaments in the series will feature one of the gift in question.

With two ornaments in one box, the ornaments come in plastic.  I was glad to see this since I always worry I will break the wings off these birds when I wrap them up at the end of the year.  Frankly, I’d like to see the rest of the series encased in plastic inside their boxes.

Of course, Hallmark breaking their own tradition hasn’t been without controversy.  Many people feel betrayed by Hallmark because their collectible is now worth less.  I can see that side of the argument.  However, I tend to side with those who think it is a good thing in the long run.  If we can get more people to buy the series, sales will be stronger on the overall series for the nine years that are left.  Then again, I bought a set myself, meaning I’ll be getting two every year until it ends.

So if you’ve missed out on this series, now’s your chance to start it today with the Twelve Days Of Christmas Two Pack without paying the high secondary market value.  You’ll be thrilled you did in the years to come as the beautiful series continues.

Of course, you'll need to get all of the 12 Days of Christmas series.