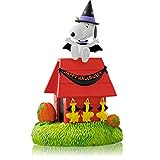 Stars: 5 out of 5
Pros: Snoopy as Dracula, and friends, sound
Cons: Only if it leads me to other Halloween ornaments
The Bottom Line:
Snoopy and
Along with a couple friends
Are in spooky mood

I resisted.  I really did.  After all, until 2014, the only Halloween ornament I’d bought from Hallmark was part of last year’s Happiness is Peanuts All Year Long series.  But come on, how could I resist Hangin' With Count Snoopy?  I just hope this isn’t opening the flood gates to more Halloween ornaments.  (Really, I don’t decorate for Halloween.  I did resist the Halloween series that started last year, after all.)

As you might guess from the title, this is another Peanuts ornament.  Snoopy is sitting on top of his doghouse, only he’s wearing a vampire cape and a black pointed hat.  His arms are holding the cape and out to the side, so the cape is spread out to look like wings.  At the bottom of the doghouse are two pumpkins in the grass.  And across his doghouse is a black banner with orange letters reading "Happy Halloween!"

Obviously, Snoopy is dressed up as Dracula.  So why is it called Hangin’?  That’s where the fun really come in to play.  Hanging from the side of the doghouse, upside down, are and two of his little bird friends.  They are wearing fake vampire wings as well.  And they are attached as dangles, so they move a little when you actually brush them or tip the ornament.

On looks long, this ornament is so cute.  The birds on the side of the doghouse are just that perfect touch that makes you smile.

However, this is a magic ornament, so there is sound as well.  When you pressed the button, you hear “Spooky Halloween Music.”  That's what the box claims, anyway, but you might better recognize the music as Bach's "Toccata and Fugue in d minor".  You know, “Dindinin, dundundundun dun.”  (Okay, fine, I had to ask someone else myself since I recognized it but I couldn't remember the name.)  Again, it’s a great touch with the dramatic organ music and two different selections from the piece, but the perfect finish is actually still to come.  You get to hear Snoopy do an evil chuckle at the end, and he sounds like he is trying to fit the Dracula part.  Snoopy's laugh comes at the end of both sound clips.  Again, it’s just absolutely perfect.

Since I don’t decorate for Halloween – really, I’m serious – I’m happy to report that this ornament has a nice, flat base.  That means I can up it out somewhere to enjoy every year in October.  I’ll probably put it next to Linus from last year’s series.

However, if you do want to hang the ornament, you’ll find the little ring off the side of Snoopy’s hat.  He hangs straight, so no matter what you find to hang him from, he’ll look great.

Truly, this can’t be the start of anything new.  (Although the Halloween Cupcake is calling my name as well.)  I just couldn’t resist Hangin' With Count Snoopy.  Any fan of the character will fall in love with it.