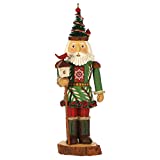 Stars: 4 out of 5
Pros: Beautifully crafted with lots of detail
Cons: Seems a bit pricey for what it is
The Bottom Line:
Nutcracker series
Starts with many great details
A bit expensive

This Nutcracker Series is Off to a Princely Start

Hallmark has my number.  Every year, I promise myself I won’t start any new series, and every year I find one that I absolutely must start.  For me this year, it is the Noble Nutcrackers.  Prince of the Forest was just too good to pass up.

This series advertises itself as featuring a royal representative of a different enchanted nutcracker kingdom.  As such, I don’t expect there to be any traditional looking nutcrackers.  This one certainly isn’t.  As the title suggests, our nutcracker this year is representing nature.  He’s very green with some red for accents.  His coat is trimmed with vines and berries, and his belt is a wreath.  In one hand, he’s holding a bird feeder that is currently home to a couple of birds.  His crown?  It’s a miniature fir tree, of course.

I love nutcrackers, so I was tempted by this series as soon as I heard the name.  However, the price point made me reconsider for a while.  (Yes, really.)  At $22.99, this is the most expensive non-magic ornament I’m aware of.  I’m hearing it is because of the intricate detail in the ornament, but it still is a hard price point to get past for a piece of carved plastic.  Yes, I know that’s what most of the ornaments I buy from Hallmark are, but they aren’t usually this expensive.

However, it was that detail that won me over.  This really is a work of art with lots of great detail to look at.  It is beautiful, and I just couldn’t pass it up.  I love how the ornament is crafted such that it looks like it is carved from wood.  I might be more selective with this series overall, but I had to get this one.

Like all nutcrackers, this one has a strong base, so you can display him on any flat surface.  In this case, his base is a tree trunk.  That’s another of those details I love.  While his mouth itself doesn’t open up, there is an area in his chest that opens like a regular nutcracker would.

Being the first in a series, you’ll find a 1 in a Christmas tree on the bottom of the ornament.

Yes, I still think the price is a bit higher than it should be, but overall, I do love Prince of the Forest.
Check out more of the Noble Nutcrackers ornaments.