I'm back this Friday with another Book Beginnings and Friday 56.

This week, I'm featuring The Self-Working Trick and Other Stories by John Gaspard. 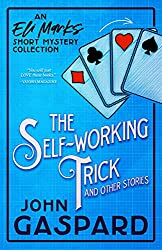 While this book is being called the eighth in the series, it's also a collection of short stories.  As such, my two teasers are from two different stories this week.

As you've probably figured out, the main character in this series is a magician.  Yes, it is a mystery series (because this is me and I read lots of mysteries).  However, both of these teasers focus a bit more on the magic side of things.

Here's how the opening story, "The Invisible Assistant," begins:

"Now for my next effect, I'm going to need another volunteer."

Short and sweet.  I've got a longer teaser from 56% of the way into the ARC I read, which is from the story "Magician in Trouble."

Usually, this point in the trick gets a bit of a reaction from the audience; an 'ooh' or an 'aah' as they realize their card has disappeared entirely from the deck.
Leon, as the situation had already made clear, was not my typical audience.
"You lost the card?" he said, sounding frantic.  "You don't know where it is?"

This book actually comes out the first of February, but I'll be reviewing it on Tuesday.  I hope you'll come back then to see what I thought of it.

In the meantime, have a great weekend.