Given the date, I feel like I should be featuring a Star Wars book for this week's Can't Wait Wednesday.  But alas, I read mysteries, not Star Wars novels. (Well, I did read a few, but before I started reviewing, so no reviews on here.)  Looks like I'm rambling again.  Let's get to it, shall we?

This week, I'm featuring Death in the Aegean, the first Intrepid Traveler Mystery from M. A. Monnin. 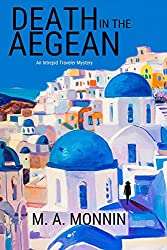 Isn't that cover gorgeous all by itself?  I love it.  Here's the official teaser:

When private banker Stefanie Adams takes a much-needed vacation to the Greek isles, vowing to embrace opportunities as they come, instead of finding romance and adventure she is suspected of murdering a bride who accused her deceased father of artifact theft. Unfortunately, the newlywed’s accusation also ties Stefanie, a former archaeology student, to the robbery of a newly discovered Minoan statue, the golden Akrotiri Snake Goddess.

With two high-profile crimes to solve, Greek police are under pressure, and both crimes lead straight to Stefanie. To avoid Greek prison and maintain her career, Stefanie must identify which of her fellow travelers is the real killer.

Between the light-fingered backpacker with an eye on the bride’s jewelry, the travel blogger whose career the dead woman ruined, a flirtatious German tourist who is after more than romance, and the long-suffering bridegroom, Stefanie’s task won’t be easy. Everyone, it seems, had a motive for wanting to see the last of Emma Keller.

Stefanie’s investigation entangles her in a web of danger and intrigue, international crime and long-buried secrets. When she herself becomes a target, Stefanie doesn’t know who to trust. As charming Thomas Burkhardt warns, Where Greed Leads, Murder Follows...

The books comes out in a couple of weeks on May 19th.  I'll be buying the book, so don't know when I'll get a chance to read it.  But hopefully soon after I get it.