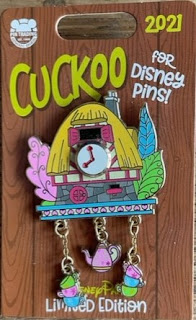 Stars: 4 out of 5
Pros: Fun take on a classic attraction
Cons: A little more would have been nice.
The Bottom Line:
It’s tea party time
Fun cuckoo clock themed design
That fans will enjoy

I Believe it is Tea Time

Since the Mad Tea Party is an attraction that so many people associate with the Disney Parks, it’s no surprise that it pops up regularly in various pins series.  It got an entry in the Cuckoo for Disney Pins series, and it is a fun one.

The main part of the pin is a cottage.  It immediately looks like one that we saw in the Alice in Wonderland animated movie as well as the house that holds the operating booth for the attraction at Disneyland.  Now, I’ll admit, the cottage I’m picturing in the movie when I look at this pin isn’t from the tea party scene, but it’s been a while since I watched this movie, so maybe that’s on me.

Anyway, the clock itself is a pin on pin.  While we don’t see any numbers, it is pointing to 11:40.  Or is it 7:55.  It’s a little hard to tell which hand is the minute hand and which one is the hour hand.  Dangling from the clock we have the weights that make the cuckoo clock part work.  In the middle, we have a tea pot.  On the sides, we have stacks of tea cups.

This pin is immediately recognizable as Mad Tea Party related.  It would have been nice if they’d included a couple more nods to the attraction, although I’m not sure what.  The clock face is too small to really have much else on it, for example, and if it had been bigger, it would have hidden the rest of the cottage.  Additionally, it would have been fun to have the clock pointing to traditional tea time.  On the other hand, the tea party in the movie was non-stop.

Okay, so I’m being a bit nitpicky.  Overall, I do like this pin.  It’s a fun take on the attraction.

So, if you are a fan of the Mad Tea Party, you’ll be happy to add this cuckoo clock themed pin to your collection.