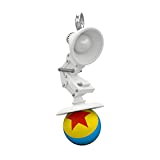 A Little Luxo Jr. for Your Little Tree

Any fan of Pixar is familiar with their Luxo Jr. logo since it is shown at the beginning and ending of all their movies.  Several years ago, Hallmark released it as an ornament for their regular ornament line.  Now, they have shrunk it down to a mini ornament and released it as Pixar Lamp and Ball.

Yes, before we get anywhere else, we are going to talk about that name.  Why?  Clearly, Hallmark has a license with Disney and Pixar, so why can’t they call it what it really is?  I think it has to do with the trademark of the lamp itself and not Disney/Pixar, But that is the first thing that popped into my head.  I’ll let it go now.

The ornament is pretty much what you’d expect.  We’ve got the white lamp sitting on top of the colorful ball.  The lamp is looking straight ahead at the moment and not out at us like he does at the end of the logo clips.  It’s nothing unexpected, but it’s exactly what I picture when I think of an ornament with the Pixar logo.

Do keep in mind this is a miniature ornament.  All told, the ornament is roughly an inch tall.  That’s not much at all, is it?  As long as you know that before you get it, you’ll be fine.

The base of the ornament is the ball.  As a result, it won’t stand up on its own.  Not that I would really want to put something this small out to be displayed since it would be easy to lose it.

The good news is, when you go to hang this ornament, it hangs perfectly straight.

I’m enjoying adding miniature ornaments to my collection.  Being the Pixar fan that I am, getting Pixar Lamp and Ball this year was an obvious choice.  If you love the studio, you’ll be glad you got it as well.