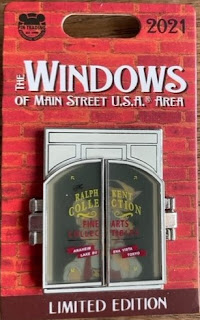 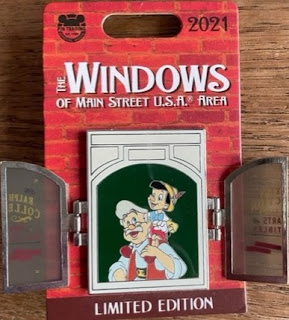 Stars: 4 out of 5
Pros: Great pin to honor man behind early Disney parks merchandise
Cons: Doesn’t look quite like window in the parks
The Bottom Line:
Disney merchandise
Honors man who created
Much over the years

A Collectible to Honor a Merchandising Legend

I feel like many of the people honored by the Windows of Main Street pin series have been people who started working for Disney fairly early on in the company’s history.  As I was reading up on many of them to write these reviews, I felt like many had joined the company by the 1940’s at the latest.  Not that there is anything wrong with that, but I found reading about Ralph Kent, the subject of the pin I’m looking at this month, different for that reason.

You see, Ralph didn’t join the company until the 1960’s, and it was the fulfillment of a lifelong dream when he did.  As a kid, he grew up watching Disney movies in the theater, and it ignited a life long love of animation and art in him.  Once he got out of the army, he was thrilled to get a job working at the Disney company.  He spent much of his career working on Disney merchandise for Disneyland, and then Walt Disney World.  A fun bit of trivia – he created the first Mickey Mouse wrist watch, which was a limited edition watch.

It's no surprise, then that his window is a tribute to the “Ralph Kent Collection.”  That’s up at the top.  In the middle, we see “Fine Arts, Collectibles,” and at the bottom, we get “Anaheim, Lake Buena Vista, Tokyo.”  In the parks, this window is located above Casey’s Corner in Walt Disney World.

This is the first window that only partially looks like the pictures of the window I’ve seen.  While the window part itself looks fine, the surroundings of the window don’t look like what is in the park at all.  On the other hand, the window is opaque enough that we can read what is on it easily.

When you open the flaps, we see Geppetto and Pinocchio.  While Ralph obviously never worked on the movie, this is actually a great tribute.  As a boy, Ralph identified with all the trouble that Pinocchio got into.  As an adult, he loved wood working like Geppetto and identified with him.  The picture is cute with Pinocchio sitting on Geppetto’s shoulders.

And, can I say, how appropriate this pin is?  Disney merchandise to honor someone who contributed to Disney parks merchandise?  I would have been disappointed if they hadn’t included someone like this in the series.

While the window could have looked a little more like its real world counterpart, overall this is a fun pin.  Collectors will be happy to get it to honor Ralph Kent.