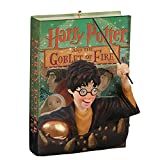 Golden Eggs and Dragons Popping Off This Ornament

This year, we are up to the fourth entry in Hallmark’s unofficial series of Harry Potter book covers.  Since I’ve enjoyed the others, it’s no surprise that I’m mostly happy with the Harry Potter and the Goblet of Fire ornament.

As always, this ornament is inspired by the original book cover.  The front of the ornament features Harry holding a wand in one hand and a golden egg in the other.  There’s a dragon tail in front of him and profiles of other characters behind him.  Harry, his wand, the egg, and the dragon tail are all coming out of the cover, which is what makes these fun.  Harry’s elbow is even sticking out the side of the ornament, which is a nice touch.

The other sides of the ornament are also painted to look like the side and back covers of the original.  While the ornament isn’t as think as the real book, we get the idea of pages on the other edges.

The ornament is thick enough that it will stand up on its own.  I’m a bit nervous about it, however, since I worry that the wand might break off if it falls over and lands wrong.  But if you have a place you feel confident it won’t get knocked off, that would be an option for displaying it year round.

The ring to hang the ornament is near the front cover of the book, and it’s placed perfectly.  When you go to hang it, you’ll find that the ornament hangs perfectly straight.

While I do like this ornament overall, Harry’s face and expression seem off to me.  Granted, he also looks a little weird on the original book cover.  I can’t quite put my finger on what it is that bothers me, but it’s a minor complaint overall.

As a reader, I’m enjoying having these books to hang on my tree.  I pretty much ignore the Harry Potter ornaments these days except for the books.  I’m thrilled to have the ornament of Harry Potter and the Goblet of Fire, and I’m looking forward to getting the rest.