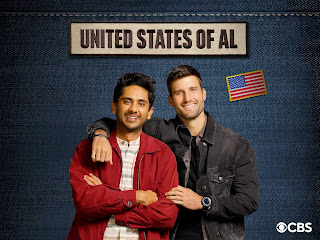 Stars: 4 out of 5
Pros: Likeable characters and some important topics
Cons: Amusing at best, which isn’t a that great for a sitcom
The Bottom Line:
Fish out of water
The laughs are not plentiful
Show still pulls me in

Weak as a Comedy, but the Show Has Grown on Me

I’m still trying to find at least one sitcom to watch, which is hard since so many just don’t appeal to me.  Earlier this year, that quest led me to give United States of Al a chance.  While I find the comedy weak, I found the characters really grew on me as season one progressed.

The show centers around Riley (Parker Young), a former Marine who has served multiple tours of duty in Afghanistan, and Al (Adhir Kalyan), his interpreter while he was overseas.  The two formed a bond, becoming best friends, and Riley has gotten Al to the states.  They are living together in the garage of Riley’s dad, Art (Dean Norris).  Also still living at home is Riley’s sister Lizzie (Elizabeth Alderfer).  While they aren’t divorced, Riley is estranged from his wife Vanessa (Kelli Goss), but the two are still connected by their daughter, Hazel (Farrah Mackenzie).  This is a fish out of water comedy, and the show usually focuses on stories of how Al’s views of life are different from those of Riley and his family.  But we aren’t mocking Al or even Riley completely.  The show pokes gentle fun at both of them.

Season one consisted of thirteen episodes.  Over the course of these episodes, Al has to get an American driver’s license.  Al deals with homesickness.  Riley and Al buy a new car.  And Al tries to get Riley and Vanessa to patch up their differences despite Vanessa’s new boyfriend, Freddy (recurring guest star Brian Thomas Smith).

Obviously, the plots of this sitcom aren’t anything groundbreaking.  And, to be honest, the jokes aren’t especially clever or creative either.  Maybe that’s the problem I’m having with sitcoms these days – the fact that it is harder to write punchlines we haven’t heard before at this point.   I might get a laugh or two out of an episode, but most of the time, it’s just a grin.  At best, this show is amusing.

But, since I didn’t have much else to watch on Thursday nights, I kept watching.  And that’s how the characters grew on me.  After the first few episodes, the writers began to add some depth to the characters, and the show began to tackle weightier issues.  And that’s what began to hook me on the show.  I actually care about the characters.

I’m also impressed with how the writers are balancing things.  At times, they definitely bring in a topic, and we know how they feel about it, but they manage to do it without it being a complete lecture, and they keep that scene to a minimum.  Other times, they present both sides of an issue and leave it at that.  Rather shocking for a modern TV show, right?  They tackle issues related to veterans and the situation in Afghanistan as of Spring 2021 (when these episodes aired).  Yes, they do still go for jokes most of the time.  And they don’t do this in every episode.  But it gives the show a little more depth and makes me care about the characters a little bit more.

The actors have done a great job with this subtle shift.  They capture every moment perfectly, be it a lighter moment or something more serious.  These performances also make me care about the characters that much more.

If you are looking for a quiet show that sheds some light on some different topics in a lighter manner, then give United States of Al a chance.  I know the first season isn’t for everyone, but I am glad I kept watching.