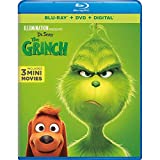 Stars: 4 out of 5
Pros: Surprisingly fun take on familiar story
Cons: Still has some pacing issues; not quite Seuss’s look
The Bottom Line:
Familiar story
Most of the changes work well
Turns out I enjoyed

Still Stretched, but this Version of The Grinch Does Entertain

When Illuminations released their animated take on The Grinch back in 2018, I wasn’t that interested in seeing it.  I was convinced that it would be hard to create a full-length movie that didn’t drag things out too much.  When I spotted it on TV last year, I decided to give it a try.  While this version does have pacing issues, it turned out to be much more entertaining than I expected it to be.

You already know the heart of this story.  It tells the story of Grinch (voiced by Benedict Cumberbatch), who hates Christmas.  Unfortunately for him, he lives just north of Whoville, and the Whos love Christmas.  As much as he tries to avoid it, he can’t help but be bothered by the music and the spectacle that they make Christmas.  But this year, he’s going to do something about it.

Meanwhile, we also meet Cindy-Lou Who (Cameron Seely), who is desperate to meet Santa to get a special request to him.  What will happen when her path crosses Grinch’s?

Like the other versions of the movie I have seen, this one does try to give us a little backstory on Grinch to help explain why he hates Christmas.  However, it doesn’t spend much time on that.

As much as I like other versions that have Cindy-Lou attempting to be nice to Grinch before that fateful Christmas Eve, this one actually gives her a separate storyline.  I guessed where her story was going early on, but I appreciated it and how it impacts Grinch some as we near the climax.

Of course, there’s still not enough story for an hour and a half movie, so this one is filled with sight gags and slapstick.  It actually works pretty well and had me laughing more than I expected.  At times, it still felt like the film was dragging, but the jokes and gags really did help with that.

The soundtrack is great.  While I wasn’t especially fond of the cover of “You’re a Mean One, Mr. Grinch” we get here, we do have some classic versions of Christmas songs and a few modern classics popping up here.  These songs definitely helped make the film work for me.

I was surprised to find that the characters didn’t quite fit the Dr. Seuss drawings.  If anything can bring his whimsical work to life, you’d think it would be animation.  Here, the characters look a bit more stylized like the rest of the films that Illuminations has released (Despicable Me, etc.)  I’m not saying they look bad, but they aren’t quite Dr. Seuss.

Another thing I liked about this version is that we see more of Grinch apologizing to the Whos and there is more to the story after he brings Christmas back.  I like how all of that played out.

There is more to like than dislike with this version of The Grinch.  While it probably won’t be annual holiday viewing, I’m glad I watched it and I will certainly consider watching it again in future Decembers.