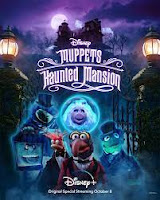 Stars: 4 out of 5
Pros: Laughs and fun with the Muppets and friends
Cons: Final one third’s shift in tone
The Bottom Line:
Muppets in Mansion
Combo makes for laughs and puns
Fun at Halloween

I didn’t need to know any more about it than the title - Muppets Haunted Mansion - and I was in.  While I may not be the world’s biggest fan of The Haunted Mansion, I figured that the Muppets would make a fun special inspired by the classic Disney attraction.  And so, last Friday, I turned to Disney+ to see just how much fun it would be.

Instead of going to the annual Muppet Halloween Party, this year, Gonzo has received an invitation to spend Halloween night in the mansion where his idol, The Great MacGuffin, disappeared 100 years ago.  Along for the night is Pepe the King Prawn, who is expecting a celebrity filled party.  Gonzo, on the other hand, is hoping to figure out what happened to MacGuffin and prove that he is still The Great Gonzo.

Ignoring several ominous warnings, Gonzo and Pepe meet their host (Will Arnett) and enter the mansion.  Will they survive the night?  Or will they become the latest people to disappear?  And which celebrity will cameo next?

Unfortunately, the final third does fall a little flat.  Pepe meets up with the Black Widow Bride (Taraji P. Henson), and I just felt like that wasn’t the best plot point.  Maybe it’s because I’m not a fan of The Bride in the Haunted Mansion, and I’m not exactly sure why she is suddenly such a huge part of the attraction’s mythology since I can remember the attraction without her in it.  Meanwhile, Gonzo is going through his own revelation, which felt a little forced into the special so we could have some character growth.

These complaints aside, this really is a fun special.  It’s about as scary as the attraction itself, so it would be appropriate for all but the most easily frightened.  Its tone is playful and fun.

While most of the Muppets are supposed to be at a party, they also manage to appear in the Mansion, so we don’t miss out on time with them here.  Fans of the show will appreciate how one of the old recurring sketches managed to be worked into this special.

There are plenty of cameos in the special, and I’m not going to try to name them all.  But I do want to give a special shout out to Ed Asner, who appears as one of the ghosts in the graveyard.  I’ve been a fan of his for years, and given his recent passing, there was something very bitter sweet about seeing his cameo here, especially as a ghost.

Oh, and be sure to watch all of the credits.

If the tone of the first two thirds had carried over to the end, Muppets Haunted Mansion would have been perfect.  As it is, the special is still fun.  I will definitely be revisiting it.