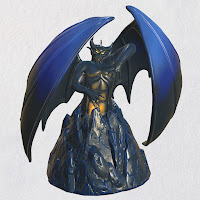 Chernabog is Ready for His Night on Your Tree

Even with as big a DisNerd as I am, I had missed that Chernabog was a well-known Disney villain until the last few years.  I’m still a bit surprised that people consider him a villain or even know his name.  Yet, I still found myself getting the limited-edition Hallmark ornament they released of him this year.

In case you are wondering exactly who I’m talking about, he’s the demon who spends the night torturing people in the “Night on Bald Mountain” segment of the original Fantasia.  Obviously, he is a villain, but I wasn’t aware he had a name, much less a following as a Disney villain.  But he pops up every so often, including here.

The ornament is good.  It features Chernabog on the top of Bald Mountain.  His wings are partially open to reveal him.  His hands are out to spread his evil around.  If you are looking for an ornament with his likeness on it, this will certainly fit the bill.

The ornament features an added light element.  There is a hole in the bottom of the ornament you can use to stick a light in and that will make Chernabog’s stomach glow.  And it sounds great in theory.  However, none of the lights I have are long enough to reach the part of the ornament that is supposed to glow.

The gasket for the light bulb sticks down slightly, so the ornament doesn’t stand perfectly flat, but it is close enough that I would have no problem setting it out to be displayed.

You’ll need a long hook to hang this ornament since it will have to get past Chernabog’s wings.  The ornament does tip forward some, but a well-placed tree branch will help disguise that.

I wasn’t going to get this ornament, but the DisNerd in me stepped up and put it in my basket while I was shopping.  Despite the flaws, I am happy to have it in my collection, but it isn’t something I expect to display on a regular basis – unless it becomes something I pull out every October.

If you are like me and want to add to your Disney character ornament collection, you’ll be glad you got Chernabog.  Otherwise, you can skip right by this ornament.

Looking for other ornaments of Disney Villains?  Check out the Unforgettable Villains series.