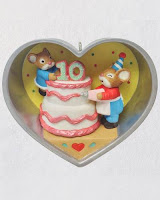 Stars: 4 out of 5
Pros: Nice series anniversary piece
Cons: Not really Christmassy, so will stand out on a tree
The Bottom Line:
Celebrate ten years
But does not look like Christmas
Still glad I have it

Hallmark loves to mark milestones in their ornament series with limited edition ornaments.  In 2021, we got Ten Sweet Years to celebrate the tenth anniversary of the Cookie Cutter Christmas series.

I’ve got to admit, I am a bit surprised by the choice of the cookie cutter shape that frames this ornament.  It’s a heart.  I guess it is because fans love the series or the artist loves the fans.  Something like that.  It is a bit of a disappointment since we did already have a heart in the Cookie Cutter Through the Years spin off series.  But I’m also stuck on what we could have had that would have made a better frame for this ornament.

The scene inside the ornament features two mice.  Who knew our little mouse friend had a friend of his own?  They are working on a large cake.  It’s got two tiers, and covered in white frosting.  One mouse is piping pink frosting on the cake while the other is putting 10 on top to celebrate ten years.  Behind them, we can see confetti on a yellow background.

I’m a bit surprised to see that this ornament hasn’t been as popular as I expected.  Usually when there is an anniversary piece like this, fans of the series flock to get it, but this one has stuck around in stores.  Maybe, like me, they aren’t in love with the heart shape.  Maybe the scene inside doesn’t inspire them since it isn’t related to a holiday.  For whatever reason, it hasn’t been super popular.

While this isn’t my favorite in a series that I do love, I do still like it.  It’s nice to celebrate ten years.  But I don’t see myself putting it on my Christmas tree more than this year, or even being tempted to do so.  Maybe that’s why it stayed on the shelves.

Since the shape is a heart, it can’t stand on its own.  I’m a bit surprised to find that it doesn’t hang straight.  It tips back noticeably.  Since the loop has the entire top surface, it seems like they could have balanced it a little better.

While Ten Sweet Years isn’t a great ornament on its own, it does serve as a nice memento to celebrate ten years of Cookie Cutter Christmas ornaments.  For that reason, I’m glad I got it.

Enjoy the rest of the Cookie Cutter Christmas ornaments.