Music Review: 24 by Point of Grace 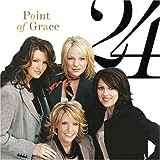 In 2003, Christian artists Point of Grace hit a milestone unequalled anywhere else in the music world - they had 24 songs in a row hit #1.  Okay, so we're talking the Christian music charts here, not the overall charts.  But that is still quite an accomplishment.  To celebrate, their record label released this special two disc best of collection called, appropriately enough, 24.

The set actually contains 25 tracks.  That's right, it starts off with the obligatory new track.  "Day by Day" is a perfect example of what made the ladies of Point of Grace so popular.  It's upbeat pop with excellent harmonies from these four women when they aren't trading off the solos.  And the song talks about how God is slowly transforming us into His image.  I wasn't that surprised when this song became their 25th consecutive #1 hit.

From there we flash back 10 years to 1993 and their self-titled debut disc.  The sound may be a bit dated with a little too much programming, but it's not quite as bad as something from the 80's.  "I'll Be Believing" is an upbeat commitment to faith with a quite prominent horn.  "One More Broken Heart" is a commitment to reach out to those who are hurting no matter the cost.  This one is mid tempo and a bit slower; I love the tight harmonies on it.  But my favorite from that first release was "Jesus Will Still be There."  This slow piano ballad is a great reminder that Jesus will never leave us.  It's the kind of song that works well when I'm hurting to remind of His presence in a kind, friendly way.  All told, there are six songs from this release on the collection.

The remaining five tracks on disc one come from their sophomore release, The Whole Truth.  The hits start with what is still one of my favorite songs from Point of Grace, "The Great Divide."  Oh, we can argue back and forth all day about how the imagery of the consequences of sin and what Jesus did to bridge that are cliché.  And you'd be right to say that.  But sometimes I need the simple reminders to make me remember that.  Every time I hear this simple, slowish song, I am left praising God for all He did for me.  I also like "Gather at the River," an upbeat song about the importance of forgiveness between Christians.  But it's the orchestra and minor sounds on the verses of "God Is With Us" that makes that song stand out from some of the others.

Disc two of the set contains 13 tracks and starts with the four hits from Life, Love, and Other Mysteries.  Since that's one of my favorite Point of Grace releases, I will admit I wish it was better represented.  But all four tracks are great.  "Keep the Candle Burning" is one of their frequent songs of encouragement that picks up some in tempo when they reach the chorus.  While still relying on keyboard, they aren't sounding as dated here.  Guitar is the main feature of "You Are the Answer," a song that proclaims the power of God to solve any problem.  Finally, "Circle of Friends" is a quiet but upbeat song about the power of good friends and the promise to spend eternity with them.  Rounding out the tracks, we get "That's the Way It's Meant to Be."

Of the five releases represented here, Steady On is my least favorite.  So it's a bit frustrating to have six songs from it here.  That's especially true since "The Song Is Alive" was one of the cuts.  I'm not sure what it is about the song, but I've never liked it.  The harmonies are great, but the lyrics are just too repetitive for me, I guess.  Fortunately, there are some good tracks here.  "Steady On," about allowing God to slowly work on us is a fun number.  "The Wonder of It All" is a slower number reminds us of God's amazing power.  But my favorite here is the upbeat tribute to God's faithfulness, simply titled "My God."

The final three cuts come from Free to Fly, and they are all awesome.  "Blue Skies" is a mid tempo song that talks about having faith in God during the storms of life.  The ladies' voices absolutely soar over the orchestra during the chorus.  "He Sends His Love" is another of their songs of encouragement.  It's not exceptionally deep, but is a good reminder that God is still in charge no matter what is happening.  Finally, "Praise Forevermore" is something rare for Point of Grace, a pure praise song.  But this isn't a simple praise chorus.  It's still got a nice pop beat and tight harmonies.

And I can't talk about this release without mentioning the booklet.  While they don't include the words to these songs, they do tell a story about each song.  Most of the time, one of the ladies shares a story about recording the song or something that happened after it hit radio.  We also get comments from people are the record label who helped get these songs on the radio.

As with most collections, one new song probably won't be enough to entice hard core fans who already own all these discs.  And I'm sure, like me, they can name favorites that never got released to radio and therefore didn't make the cut for the collection.  But casual fans will be delighted to find all their radio favorites in one place.  There's almost two hours of music here, so you can't complain about the amount of music you get for your money.

Point of Grace has heard a place in music history, and if you like upbeat, fun pop music with great harmonies, you'll absolutely understand why.  24 celebrates a milestone for the group and gives us some wonderful songs all in one place.