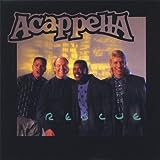 Pros: "Life," "That Could Have Been Me," verses of "Rescue"
Cons: Several of the other songs are just okay
The Bottom Line:
Music from high school
Some of these songs are average
But I love the gems

For about a year in my youth group, Acappella was the popular group.  We had been introduced to this quartet at camp that summer, and quite a few of us bought several of their tapes.  The craze faded quickly, so I don't have nearly all their music, but Rescue is one of the ones I do have.  It's not quite as good as their others, but I really do enjoy it.

As the name suggests, this male quartet sings without any instruments.  Trust me, you won't notice.  I will admit it often sounds like more than four guys singing, and the notes in the CD (yes, I rebought it years ago) do list two other guys as "additional voices."  Even then, it wouldn't surprise me to find out that the guys had recorded the songs twice to get everything in there.

The disc opens up with a rare story song from the group.  In fact, I'm guessing that group arranger/writer (and additional vocalist) Keith Lancaster had been reading the gospels while he was writing for this disc.  Anyway, that first track is "Listen to Him."  The song retells the story of Peter, James, and John seeing the transfigured Jesus.  It starts things out with a nice upbeat flavor and some nice harmonies from the guys.

Later in the disc, we get "That They May All Be One."  This slower song again shows off the harmonies as they sing many of the lines together on the chorus.  The lyrics borrow heavily from John 17 as Jesus is praying for all His followers just before He is arrested and taken to the cross.  Even though the song is slower, the humming in the background makes this song very lovely.

But my favorite of the gospel inspired songs is "Life."  Funny story here.  The song starts with someone reciting from John 10 like a Southern Gospel preacher.  I always considered it part of the song when I had the tape, so you can imagine my surprise when they made that a separate track on the CD.

Anyway, "Life" is a nice upbeat song with some fun vocal percussion and syncopation on the chorus.  This is actually a pretty complicated song, one of the ones that makes me wonder just how many voices I'm really hearing at once.  One of their guys is a very deep bass, and I love his "Life" on the chorus.  It's just a fun song all the way around.

While these three songs are definitely taken from the same section of the Gospels (hence my earlier speculation), I always associate the first track on side two (even after all these years, the positions on that old tape are ingrained in me) with the Gospels around.  "It Is Good for Us to be Here" is a line that Peter says during the transfiguration story, but in this case, it is about the joys of Christian fellowship in a church setting.  It's upbeat and fun with some rather unusual harmonies coming and going throughout.

A song that stopped me in the tracks the first time I heard it was "That Could Have Been Me."  Again the song is slower with lots of vocal music in the background, and I love how they faded into and out of the song.  It's got a melancholy air and a minor key to go with it.  And that just makes the lyrics all the more powerful.  It's a call to help the poor who have nothing, but instead of preaching to us, it reminds us that we could have been born in their circumstances.  Pretty powerful stuff.

The title track is interesting.  I love the idea behind "Rescue" and the verses.  The song talks about how amazing it is that God continually shows us His mercy by rescuing us from our sin.  But then there's the chorus, which has the guys singing "You come to my rescue...rescue...rescue."  It's a slower song, which again sits the verses, but with that chorus slows things down.  I want to like the song, but it just doesn't quite work.

But for pure fun, check out "Everybody Said (But Nobody Did)."  The song that's a slightly sarcastic look at how people try to push jobs they don't want to do off on others, crafting them as important.  Actually, it's a pretty scathing look at inaction on many people's parts.  But what makes it so fun is the music.  It's got a flavor that actually makes it stand out from the rest of the disc.  I'd love to know who did the lead vocals because his work here makes the song.

Several of the tracks here are only okay.  "Who is Gonna Tell the Child?" and "Take It Away" aren't really that memorable.  "I Have a Friend" is a fun close to the disc, but gets lost is some of the other tracks as well.

While Rescue isn't the best of my Acappella collection, I still enjoy pulling it out and listening to it every so often.  And these songs still take me back to my high school days, too.