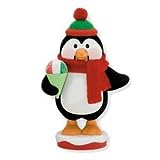 
"Snow" Sorry to See this Series End.  At Least It Ends on a Happy Note.

Hallmark's Noel Nutcrackers series hasn't turned out to be as popular as they expected, and it isn't that surprising since the first in the series was only okay.  This year's entry, "Snow" Happy To Serve is the final one.  It's a shame this little guy didn't come first because he is so cute.

This year's ornament features a penguin.  The white part is plastic, but the black is fuzzy felt.  In one hand, he's holding a snow cone with stripes of red, white, and green on it.  The snow cone has little bits of glitter on it, making it sparkle.  The base he stands on also has glitter on it.  Neither glitter is overwhelming.  There's just enough to catch the light without actually coming off on your hands.  The penguin is wearing a red scarf and a red and green cap; both of them are fuzzy as well.

Like the others in the series, the penguin is a working nutcracker, although I doubt he could crack any real nuts.  His tail in the back is the lever that works the nutcracker, and the bottom half of the beak moves when you move the lever.

Unfortunately, this also brings up the only flaw in the ornament.  The scarf I mentioned earlier sits right below the beak.  You can't get it to move very far because the scarf is in the way.  And just from the little bit I've played with the lever, the scarf is beginning to bunch there.  Both issues are minor complaints, however.

On the base of the stand are the copyright information and the little symbol Hallmark uses to denote a series ornament.  Both are raised in the red base, but don't stand out if you aren't looking for them.  That means they won't distract when hanging from the tree.

The little brass ring to hang from the tree is hiding behind the pom pom at the top of the hat.  He leans forward slightly when you hang him, but it's not enough to be a problem at all.  If you must have him perfectly level, he sits level on his base.  But I think he will look best on a Christmas tree.

I liked this ornament when I saw a picture of it in the Dreambook earlier this year, but I fell in love with it the first time I saw it.  It turned out so much better than any picture or words can do justice.  You really need to see it for yourself.

If "Snow" Happy To Serve had come earlier in the Noel Nutcrackers, it might have made the entire series much more popular.  As it is, I will enjoy this one and wonder just what might have been if things had continued.

Check out the rest of the Noel Nutcrackers series.