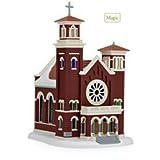 Pros: Nine design, lots of windows
Cons: Windows could light up better
The Bottom Line:
Plenty of windows
Don't quite light up completely
Like the design, too

The big thing that drew me to the Candlelight Services series is the stained glass windows.  I love sticking a light instead the church and seeing the windows glow.  So the size and diversity of the windows in Old Brick Church, the final ornament in the series, excite me.  They don't quite work out as well as they could, but I like them.

This ornament almost reminds me of a cathedral in how it is designed.  Yes, it is made out of plastic molded to look like brick.  And the roofs are red tile, so this ornament is very red.  The main body of the church is a long rectangle.

But it's the front where the design gets fun.  There are two towers on the church.  The one on the left is taller and has a cross on the top of it.  The one on the right seems a little wider, but not by much.  Neither tower has a bell in it, but the one on the left looks like it could be a belfry.  Extending from the front of the church is a balcony supported by pillars.  This is definitely the most regal church we've had in the series.

And there are lots of windows.  The color scheme on them is very light green and purple.  Honestly, these could almost be see through they are so light.  There are three on each side of the church.  The front has some in both towers as well as a big circle in the middle over the porch.  As usual, the hole for the Christmas tree light is in the back of the ornament.  The windows on the side are almost too clear, and you can see the light bulb through them.  In the front, however, the circle window and the windows under the porch light up very well.  The windows in the tower are hit and miss, and the one at the top of the left tower definitely doesn't light up no matter how you move the lightbulb.

The ornament sits on a nice white plastic base that is supposed to represent snow.  There is more snow on the edges of the roof.  This is one of the few ornaments in the series to not feature a tree of some kind in the design.

That base makes this ornament sit perfectly level, so setting this ornament out to be displayed is an option.  On the bottom of the base you'll find a 12 in a Christmas tree, showing that this is the twelfth in the series.  You'll also find the original release year, information that is repeated in the 2009 carved into the cornerstone.

Since this ornament is designed to be hung on a tree, you'll find a little brass hook in the middle of the church's roof.  The ornament hangs ever so slightly to the left, probably because the left tower is bigger.  Of course, by the time you hook the ornament up to a string of Christmas tree lights, you'll be able to correct any slight tilt.

The windows aren't quite perfect on this ornament, but I love the big circle window in the front.  That alone is enough for me to say that Old Brick Church took the Candlelight Services series out on a high note.

Be sure to check out the other ornaments in the Candlelight Services series.