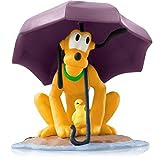 Stars: 5 out of 5
Pros: Finally, we get Pluto!  Fun details
Cons: Does tip forward
The Bottom Line:
Trying to stay dry
From little April showers
Another cute piece


Pluto and His Ducky Pal are Enjoying a Little April Shower

It’s a little hard to believe that we are still seeing characters for the first time even though we are on the ninth ornament in the Year of Disney Magic series.  (And there’s even one more characters we haven’t seen yet!)  Shower Season marks the first and only appearance by Pluto in this series of Hallmark ornaments.  Fortunately for Pluto’s fans, it’s a very cute ornament.

Since April can be known for spring rain, that’s the theme that was used here.  Pluto is propping up a purple umbrella.  He’s got his left ear up and sticking out just enough to see if it is still raining.  It looks like it must have been raining quite a bit since we can see a ring of water around the brown dirt that Pluto and his umbrella are keeping dry.

Pluto isn’t the only one hunkered under his umbrella.  There’s also a little duck there with him.  Since ducks live in water, this must be quite the rain storm to make the duck flee to dry ground.  Yet I like the idea of Pluto welcoming and protecting this new friend.

Last year’s Peanuts series went with Easter for the April ornament, but that group of characters has an obvious tie in with Snoopy as the Easter Beagle.  I’m trying to picture something Easter related with this series that wouldn’t seem forced, and I’m drawing a blank.  It does give us two generic spring ornaments in a row with the Disney series, but I don’t really mind since both of them look great.

Plus this ornament is just so cute.  As always, it’s the little details like Pluto’s ear sticking out checking for rain and the rain around the dry umbrella zone that just make these ornaments so perfect.

As with all the ornaments in the series, this one has a nice, flat base, so you can set it out anywhere.  You’ll also find the 9 in a Christmas tree on the bottom.

I’ve already got mine hanging in the stand that was sold separately to display this series.  The loop is on the top of Pluto’s umbrella, and you’ll find the ornament tips just slightly forward.  It actually allows you to see the details of the ornament better.  It’s not as bad as Donald was last month, but it is noticeable.

Even though we rarely get rain in April here in Southern California (but I am praying we get lots of it since this winter has been so dry again), the idea of April showers still makes me think of spring.  Shower Season is a great addition to a magical series.