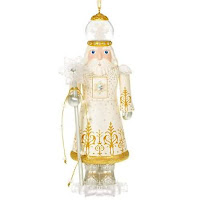 Golden Glow of Winter in this Repaint

Hallmark released two versions of the Duke of Winter ornament in 2021.  There was the regular ornament that was the official part of the Nobel Nutcrackers series, and then there was a special edition that took the original ornament and gave it new colors.  Since I am trying to cut down on the ornaments I have in my collection…I got both.

The original ornament was mostly blue and white.  Here, we get a gold ornament.  The majority is a white ornament with just a little hint of gold to it, but all the accents are a traditional golden color.  The result is stunning.  The original hits at the coldness of winter, and the golden glow this one almost seems to give off doesn’t quite fit with that.  But I’m not complaining since it looks fabulous.

Of course, it does have the same drawback the original had.  The globe with the snowflake in it on top of his head makes him look a little weird.

On the other hand, I still appreciate the snowflake in his scepter and the one he is standing on that tie in so well with the Duke of Winter theme.

That snowflake he is standing on gives him a nice solid base, so you could set the ornament out to be displayed.  It also has the series marker on it even though this is not part of the official series.

The ribbon to hang this ornament with is white with gold on it, in keeping with the theme.  There is a hint of a tip to the ornament when you go to hang it, but unless you are looking for, you won’t notice it.

And yes, there is a nutcracker action to it, even though this is really for decoration.

No, I definitely didn’t need two ornaments with the Duke of Winter design in my collection.  But the different colors are distinctive enough and pretty enough that I’m glad I put them both in my collection.

Here are the rest of the Noble Nutcracker ornaments.