Happy Sunday.  As we start another week, it's time to join my usual assortment of posts:

Sunday Post
Sunday Salon
Stacking the Shelves
Mailbox Monday
It's Monday, What Are You Reading?

Work this past week wasn't quite as bad as I feared it would be.  The deadlines were still tight, but we were able to get everything done with minimal extra drama, which was nice. 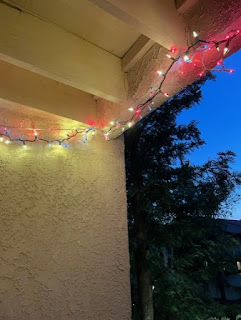 No, I didn't go paddle boarding Saturday.  I went Friday night instead.  I found a group that was meeting up and joined them.  It was a bit of a rush to get there after work, but it was nice to be out on the water.

Especially since it has gotten hot here this week.  It was close to 100 the last couple of days.  I actually started out by getting wet in the lake, and I was pretty much dry when I stopped paddle boarding an hour and a half later.

I've been talking about paddle boarding so much, I never have mentioned that I got my summer lights up.  I have three strings of lights that I wove together - red, white, and blue.  I put them up before Memorial Day, and I'll leave them up until after July 4th.  Last year, I think it was August before I finally took them down.  Unfortunately, the blue is hard to see unless you are near my balcony.  Even if this picture, they fade a bit.  But they look good from my living room, so I'm happy.

This Past Week on the Blog:

This Coming Week on the Blog:

Note: I reserve the right to switch this around if I wind up watching the new Jurassic World movie this weekend. 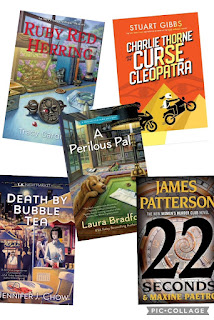 I had quiet the haul this week.  Thanks to a Kindle sale, I snagged Ruby Red Herring by Tracy Gardner.  My pre-order of Charlie Thorne and the Curse of Cleopatra by Stuart Gibbs arrived, which makes sense because it was released on Tuesday.  Thanks to the publisher, I got a couple of July eARCS, Death by Bubble Tea by Jennifer J. Chow and A Perilous Pal by Laura Bradford.  Finally, my request of 22 Seconds by James Patterson and Maxine Paetro came in at the library.

Honestly, I'm not sure why that one took so long.  I was in the top five of requests, and they ordered more copies than that.  When I checked on it a couple of times, the library said it was on order still.  It finally came in a month after the book was released.  The same thing happened with last year's release in the series as well.  Not sure why that is.  I don't use my library enough for new releases to know if this is a pattern for just something odd that has impacted the particular book I've requested.  And yes, this is for the physical book instead of the ebook.  Not sure if that would hurry things along or not.  Last year, I wound up using a different library system to get the book (I have access to two), and I had it finished before it came in on my main library system.

I finished the book I was reading on Saturday, so Sunday and Monday, I'm hoping to make serious progress in 22 Seconds.  Fortunately, this series is usually a fairly quick read since I have some other books I'm hoping to get in during June.  And yes, I know we are only half way through June, but I'm usually reading a week ahead (at least) of what I plan to review, and so I'm running out of June real estate already.  And July is booked already.  (Pun always intended.)

I think that's it for me.  Have a great week.

Email ThisBlogThis!Share to TwitterShare to FacebookShare to Pinterest
Labels: its monday what are you reading, mailbox monday, stacking the shelves, sunday post, sunday salon