Time for this week's Book Beginning and Friday 56.

This week, I've got a book I just finished a few hours ago - The Hero's Guide to Being an Outlaw, the final part of a trilogy by Christopher Healy.  I loved it!  Not that I'm too surprised since I loved the first two books as well. 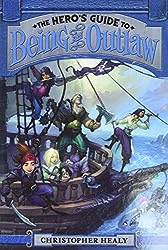 This is a middle grade book that mashes up fairy tale characters into a completely different story.  It's lots of fun filled with great humor that all can enjoy.

For example, here's how the prologue begins:

Outlaws have too many feathers in their hats.
Outlaws are allergic to seafood.
Outlaws never forget to floss.
Oh, and outlaws are people who are hunted down because they have been accused of terrible crimes.
Okay, I supposed it's possible you knew that last bit already.  But if so, then you may be wondering, "What's with all the outlaw stuff?  This is a book about the League of Princes, right?  Those guys are heroes.  Or at least hero-ish."


And here's the beginning of Chapter 1:

"Harrumph."
King Wilberforce was in a foul mood, as he had been ever since Prince Frederic had stormed out of the palace months earlier.  His son had never lashed out at him like that before.  And to think it was simply because he has banished his son's fiancee.

One final quote, this time from page 56:

Duncan raise his chin and declared, "Duty calls, everyone!  I must go!"
He saw his family's faces droop.  "Don't worry, though.  I'll be back.  And I'll bring souvenirs!"  Everybody smiled again.


And there you have it for this week.  I'll be reviewing this book on Sunday, so if you want to learn more, come back then.
Posted by Mark Baker at 12:00 AM