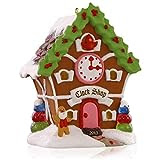 Stars: 3 out of 5
Pros: Cute design
Cons: Not enough lights up
The Bottom Line:
One more shop visit
Noelville winds to an end
Wish it lit up more


Time is up for the Village of Noelville

Every year, die hard collectors wait in dread to find out which series Hallmark is ending in a given year.  This year, two of my series are ending.  (And I’ve started three more.  I was trying to cut back, honest!)  One wasn’t a surprise based on poor sales, but I was a little surprised to see that Noelville was ending.  However, the final entry, the Clock Shop, shows why it might be time for this series to end.

As always, this is a highly decorated and tasty looking gingerbread house.  There is glittered filled white frosting on parts of the roof and ground to represent snow with green holly leaves with red berries for trim on the front.  We have hard candy bushes on two corners of the building as well.  What makes it a clock shop?  Well, there is a cookie clock on the front over the door with a red bird popping out of a window above that.  It looks a little like a cuckoo cuckoo clock, in fact, an element I certainly love.

There were two reasons I started collecting this village.  The first was creative decorating with the frosting and candy.  This ornament has that with the clock element.  The second is the light element.  And this is where this ornament disappoints.

As is usual, the windows and various other elements of this ornament are colored see through plastic.  If you put the light from an ordinary string of Christmas tree lights in the hole in the back, it shines through these parts.  However, the windows in the front, are small and there are none of the sides.  Yes, you do get some glow through the roof and bushes in three corners (the gingerbread shop owner is in the fourth corner), but it’s not enough to make up for the solid sides.  Give us bigger windows!

This isn’t the first ornament in the series to not light up enough for my tastes.  The first four were great with plenty of light, but several in the middle were this dark.  The last few were getting lighter again, but with this ornament being darker, it actually makes me feel better about the series ending.

There is a loop in the middle of the Clock Shop’s roof, so you can hang it on your tree.  It does hang straight, although that could always be pulled off based on how the light string pulls on the ornament.

If more of the ornaments in the series had been like the first few, I would be sorry to see Noelville end.  But the Clock Shop, while not bad, shows why I am okay saying goodbye to this village.

Be sure to check out the earlier places in Noelville.