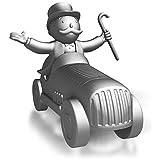 Stars: 4 out of 5
Pros: Great metal ornament for Monopoly anniversary
Cons: A little bigger than I like, very slight tip
The Bottom Line:
A victory lap
For game’s anniversary
Nostalgic and fun

It’s the board game that people love to hate or enjoy gripping about or something like that.  I’m talking about Monopoly, which celebrates its 80th Anniversary this year.  As part of that celebration, Hallmark has issued the limited edition ornament Rich "Uncle" Pennybags.  It is an ornament fans of this game will definitely want.

While you may know him better as Mr. Monopoly, you are familiar with this character.  This is the dapper older gentleman who graces the original game’s Chance and Community Chest cards.  For this ornament, he’s coupled with the classic car token.  He’s sitting in the car with his arms outstretched.  It looks like he is doing a victory lap around the board after winning a game.  The car itself looks identical to the way the car always does as a token.  The entire ornament is made from die cast metal.  While it helps the car look like a token, it makes Pennybags look a bit more like a statue than the cartoon character he normally is.  Still, it’s a great look for an anniversary piece.

What surprised me when I saw it in person for the first time is the size.  I was expecting something larger than the scale of the tokens in the game, but this was much bigger than I was expecting.  The car is just over three inches long, and with Pennybags sitting in the car, the ornament is just over two inches tall.  It’s also heavier than the average Hallmark ornament since it is made from metal instead of plastic.

Yes, the car is on wheels.  But, the car’s wheels are designed to support the ornament.  Like with the game piece, they don’t turn, and like the game piece, you’ll find that they support this ornament just fine, so you can display it with any game memorabilia or just in a fun place around the house.  It might be a little light to be a paperweight, but it would be a fun one.

Or you can use it as an ornament – you know, its intended purpose.  There is a loop in the top of Pennybag’s head, and when you slip a hook through it, you’ll find that it tips slightly to the left, but barely enough to notice.  And I’ve mentioned it is heavy, right?  You’ll definitely want to put it on a larger, sturdy branch to make sure it stays put.

Being a fan of Monopoly, I knew I had to get Rich "Uncle" Pennybags.  Yes, I did hesitate at the size, but only for a few seconds, and I’m glad I added this ornament to my collection.