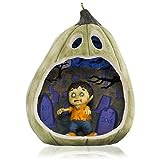 Stars: 5 out of 5
Pros: Creative variation on a theme
Cons: I fed the zombie the cons
The Bottom Line:
Spooky zombie scene
Creates nice variation
On series standards


If You Have Brains, You’ll get This Ornament

Everything goes in cycles, and right now zombies are a big craze.  Personally, I don’t see the attraction and find them extra creepy.  However, a zombie is the basis of the third in Hallmark’s Happy Halloween! series, and it helped get me to start collecting the series.

Like always, we are treated to a diorama inside a pumpkin.  But part of the reason I like this ornament is the pumpkin.  Instead of orange, the pumpkin is a very pale color.  I’d say it’s more greyish than anything else.  There are two ovals up high for eyes and the mouth, which is open wide so we can see the scene inside, is slightly misshapen, just like a zombie should look.

The scene inside is of a zombie walking through a graveyard, so he must have just woken up.  You can see a full moon and trees behind him and a few gravestones, one of which clearly has 2015 written on it.

So if I don’t like zombies, what was it about this ornament that appeals to me?  Above all, it was the creativity that was shown here.  It is a variation on the theme established by the first two in the series.  If it weren’t for them, I probably wouldn’t have given this one a second look.  Plus, with the zombie so small and, honestly, a little cute, how could he truly be scary?  I will admit, I would have though a skeleton might be a better fit for a graveyard setting, but that’s a very minor complaint.

Because this pumpkin is sagging, it actually has a wider base on it than the first two in the series, making it easier to set out on a table top to be enjoyed.  As always, you’ll find the 3 in a Christmas tree series marker on the bottom.

And there is still a loop for hanging the ornament on the pumpkin’s stem.  You’ll be glad to know that this is one place the ornament doesn’t droop – although it tips back slightly.  It actually makes it easier to see the scene inside, so that’s a good thing overall.

So even if zombies aren’t your thing, you can still enjoy this year’s Happy Halloween! ornament.  With the creativity shown, I can hard wait to find out what the scene and pumpkin will be next year.

You'll be haunted if you don't check out the rest of the Happy Halloween! ornament series.