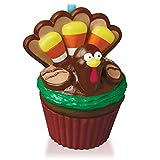 The calendar says it is fall, but I’m having a hard time believing that since it is currently in the upper 90’s here in Southern California.  (And as a fan of hot weather, I am not complaining).  But we are beginning to see fall items in the stores, and Hallmark is no exception.  They’ve just released Grateful Gobbler, the fourth in their yearlong Keepsake Cupcake series, and it’s a great piece.

Since this is the November cupcake, is it really surprising that the focus is a turkey?  The cupcake in question is obviously a chocolate cupcake, which we can tell thanks to just a bit of the cupcake that is peaking out of the reddish orange wrapper.  There is a bit of green frosting circling the outer side of the cupcake.  And in the middle is the turkey.  He looks like he is made out of chocolate frosting, at least the parts that are right next to the cupcake.  I’m not sure what the head and neck that rise out of the cupcake are supposed to be made from.  Fondant maybe?  There are two cookies shaped like wings sitting on the cupcake and a third rising out of the back of the cupcake for the turkey’s tail feathers.  And the feathers on the tail section?  Why pieces of candy corn, or course.

The plastic on this cupcake looks so much like the items I’ve described that my mouth waters a bit when I look at it.  The overall effect looks like Thanksgiving, so it is perfect for November.  And the foil on the cupcake nicely evokes the fall season, so it perfectly fits as well.  I don’t think we could ask for a better November cupcake.

Being a cupcake, this has a nice flat bottom so you can set it out as part of your display of the rest of the series or any Thanksgiving decoration display.  You’ll also find the 4 in a Christmas tree series marker on the bottom of the ornament.

If you want to hang this ornament somewhere, you’ll find the loop behind the turkey’s head, right in the middle of the cupcake.  He actually tips forward very, very slightly, but it is hardly noticeable unless you are looking for it.

While the choices in Grateful Gobbler might be a bit obvious, the execution is plenty of fun.  I’m thankful to have this in my collection, and you will be as well.

Check out the rest of the delicious celebration with the Keepsake Cupcakes.