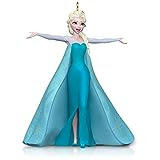 Over the last few years, Hallmark has been releasing a series of Disney ornaments that include music from the movies.  Considering how big the music to Frozen was, I was surprised that last year’s Frozen ornaments didn’t include any of the songs.  They fixed that with this year’s Let It Go, and I can see fans of the film clambering for it.

Yes, the ornament is of Elsa.  She’s standing in her trademark blue dress with her arm outstretched.  Her dress is flowing behind her and she has a happy look on her face.

My only real complaint with the ornament is the proportions.  Elsa’s head and arms look very small, but her dress flowing out behind her looks impressive.  Now, I know she had a long, flowing dress in the movie.  However, it seems to me that they could have cut it down a little and not made her seem so small as a result.  Additionally, with her arms sticking out to her side, I do worry that they could easily snap off, especially since the ornament comes in tissue paper to wrap it in for storage.  I haven’t heard stories of that happening, but you will want to be careful.

As I mentioned earlier, this is one of Hallmark’s magic ornaments.  When you have the 2 button batteries installed in the base of the ornament, just press the button on the right hand side and you’ll get a 30 second clip of Elsa singing “Let It Go” from the movie.  The clip is from the end of the song, as Elsa is embracing her powers.  It’s why the pose of the ornament is so perfect – it’s one she made at this point in the song.  The clip does end a bit abruptly, so it would be nice if they had extended it an extra half second or so, but that’s a minor complaint.

The advantage of Elsa’s flowing cape is that she has a nice base for standing.  You can set this ornament out year round and enjoy her and the song clip whenever you like.

However, if you want to hang it on your tree, you’ll be please with that option as well.  The hook is attached to the top of Elsa’s head.  When you slip a loop through it, you’ll find that she does tip back just a bit, but with the angle of her feet, it gives the illusion that she is climbing the stairs in her newly created ice palace.  This is one time when the fact that the ornament doesn’t hang level doesn’t hamper the ornament at all.

Yes, I know, I need to let my disappointment with how small Elsa’s head and body are go.  Really, that is my only complaint with Let It Go, and I am certain that Frozen’s many fans will feel the same way.