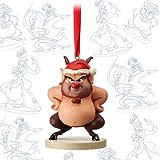 Stars: 4 out of 5
Pros: Funny pose with a rarer Disney character
Cons: Issues with the paint job
The Bottom Line:
What should be funny
Lowered by poorer painting
Wish I could love it


I Have Two Words to Describe This Ornaments – Could Be Better

One of the reasons I was so excited when I saw the Art of Disney Animation ornament series that The Disney Store is releasing over the next 12 months is the rarer characters who are being included.  One of those is Philoctetes, better known as Phil, the satyr from Hercules who trains Herc toward becoming a hero.  I love the picture and idea behind this ornament.  Sadly, the end result has some flaws.

The ornament is at once simple and wonderfully creative.  Phil is standing with his hands on his hips and a Santa hat on his head glaring at us.  Yes, that’s it.  However, Phil is enough of a grump, that the idea of him doing anything to spread holiday cheer is pretty funny.  I can almost hear him grumbling and complaining about having to wear the hat.  And he wouldn’t be very quiet about his complaints at all.

So if the idea behind the ornament isn’t the problem, what went wrong?  The execution just isn’t quite as good as the picture.  Part of it is a paint job that doesn’t quite seem to have stayed in the lines (at least on mine) on his legs.  His arms don’t actually stick out from his body, and the lines and shadow and darkness designed to showcase that don’t quite work either.  His face is wonderful, and the expression is funny.  It’s the rest that doesn’t quite work out.

Phil is standing on a circular base painted to look like marble, so it’s easy to set him out to be displayed.  The Santa hat does make this a little more of a Christmas offering than some in the series, but you could still easily enjoy him year round.

As with most Disney Store ornaments, there is already a red ribbon attached for your ornament hanging pleasure.  Phil tips back slightly when you hang him, but it is only noticeable if you are looking for it.

It’s too bad that Phil is not as sharp looking as his picture.  This could have easily been a favorite in the series.  As it is, Phil is good but not great.

Check out the rest of the Art of Disney Animation series.