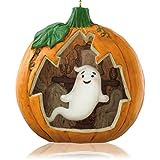 Stars: 5 out of 5
Pros: Great details in a scene creatively presented
Cons: None
The Bottom Line:
This haunted scene is
Presented in a pumpkin
Creative and fun


The Case of the Haunted Pumpkin

Since I wasn’t collecting Hallmark’s Happy Halloween! series, I didn’t pay much attention to the second entry, which came out last year.  I think if I had, I might have given it more than a ghost of a chance.  The details in it are that much fun.

Each ornament in this series features a spooky Halloween scene in a pumpkin.  And from my bad pun, you’ve probably guessed correctly that the second in the series features a ghost.  The orange pumpkin is just a tad wider than it is tall, and instead of a face, this ornament has a house carved in the front.  It’s just the outline, but it’s the shape of an old Victorian house just like is always haunted in movies or illustrations of ghost stories.  And sure enough, there is a white ghost grinning at us from the center of the scene inside.  But if you look closely behind him, you’ll see that the back of the pumpkin is etched to include two chairs sitting in front of a fireplace.  There are even windows on the sides with the curtains blowing as if a cold draft is passing through the house.

It think it was the details of the scene behind the ghost that really sold me on the ornament.  That just makes it fun.  They are very subtle, so you have to be paying attention to notice them, but I like that subtlety here.  The fact that the scene is framed by an outline of the house is great, too.

The ornament is thick enough to make the base of this ornament sturdier than the first in the series.  It still rocks a bit, but I think it would take a strong push to knock it over.  You’ll also find the series marker, a 2 in a Christmas tree, down there.

Fortunately, there is a loop attached to the stem at the top of the pumpkin, so you can hang it.  Slip a hook through it, and you’ll find that tips back a little, but that’s actually okay because it allows you to see the scene inside the pumpkin better.

The creativity of the Hallmark artists never ceases to amaze me, and that holds true with the details of the second Happy Halloween! ornament.  If you don’t hunt this one down, you’ll be haunted by regret.