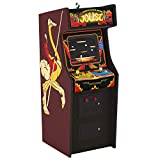 Stars: 5 out of 5
Pros: Brings back fun memories of playing Joust
Cons: None for this fan
The Bottom Line:
Classic arcade game
Flies onto your Christmas tree
This fan is happy

No Need to Joust for This Ornament

While I grew up playing some video games, there were some I always enjoyed by never had until I was an adult.  Joust was one of them.  Something about it fascinated me, but I never added it to my Atari 2600 collection, instead not getting a home version of it until I had a Super Nintendo as an adult.  But I still love the game, so I had to get the Joust arcade ornament that Hallmark released this year.

Yes, despite my talk about home gaming systems, this is modeled on the classic arcade game (which I also played a little over the years).  And it looks pretty much like you’d expect.  It’s a big black arcade machine.  At the top and on the sides is the artwork that were on the original arcade game.  The front has two controllers since you could play at the same time as a friend.  Down below are the slots to insert your quarters.

Like other arcade ornaments that Hallmark has released over the years, this is a magic ornament.  If you press the player start buttons, the screen lights up and you hear sound effects from the game.  If you are familiar with the game, you’ll recognize the sounds right away.  They capture everything in the almost 30 seconds, and it definitely makes me smile.  You need two button batteries to make the sound work, and your first set is included for you.

Since this is a recreated arcade game, there is a nice flat bottom to the ornament.  You can set it out and enjoy it year round.  If you decide you want to hang it on your tree, you’ll be pleased to see that it hangs straight.

Joust wasn’t as popular as some arcade games from the 1980’s, but I would still consider it a classic.  Then again, I was a fan of it back in the day.  Those who enjoyed the game will enjoy having this piece of video game history on their tree just like I do.

Joust may be a bit more of a specialty ornament, but it is one I am happy Hallmark released.  If you have warm memories of the video game as well, be sure to pick it up.