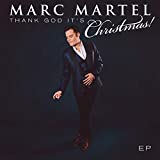 Another Fun Christmas EP from Marc

Over the last few years, Marc Martel has released a Christmas EP every year.  As a fan of his former band Downhere, I’ve picked them up each year.  This year’s offering is Thank God It’s Christmas, and it's once again enjoyable.

Marc has gained fame in recent years thanks to his participation in the Queen tribute band and tours.  Queen only recorded on Christmas song, and that’s the title track to this EP.  I must admit I had never heard “Thank God It’s Christmas” before, but it certainly fits this year.  While not a Christian song (no surprise given its origins), it talks about the struggles of the year and expresses hope and joy now that Christmas has finally come around.  It’s it perfect for 2020?  Marc doesn’t try to give the song an 80’s feel.  Instead, it feels like a cross between 1940’s and 1950’s big band and modern era productions.

In fact, that fusion describes the rest of the tracks on the disc as well.  It mostly works, but it does take a few listens to get used to the way the songs sound.

Each of Marc’s EPs has included a duet, and that duet starts off this project.  This time, he’s chosen “The Christmas Waltz,” and he’s singing it with Amy Grant.  I’ll admit, this isn’t one of my go to Christmas songs, but I always enjoy it, and this time around is no exception.

Another winner is “White Christmas.”  While Marc would knock it out of the park crooning it ala Bing, he instead chose to go with the alternative arrangement made famous in movies like Home Alone and The Santa Clause.  I love that version, too, so it’s nice to have another recording of it in my collection.

Marc does a cover of “Light of the World,” a song originally recorded by Lauren Daigle.  I don’t remember hearing it before, but it’s a nice reflection on God’s gift to us, which is the reason for the season.

Rounding out this release are covers of “I Heard the Bells on Christmas Day” and “I’ll Be Home for Christmas.”

As I said earlier, this release has taken me a couple of listens to fully appreciate, but now I’m really enjoying it.  If you are looking for some new music for Christmas this year, check out Thank God It’s Christmas.