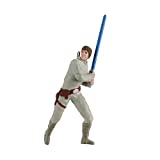 Stars: 4 out of 5
Pros: Luke Skywalker for your miniature tree
Cons: His face is off
The Bottom Line:
Miniature Luke
Costuming, details look great
But his face is off

Once Again, Luke’s Face Proves to be Problematic in an Ornament

Hallmark’s recent resurgence of miniature ornaments has begun to include more and more pop culture options.  Since I enjoy having those on my tree, I grabbed a couple of the Star Wars ornaments they released this year.  One of those is Luke Skywalker, which I mostly enjoy.

This ornament capture Luke as he is dueling Darth Vader (sold separately as a mini as well this year) at the end of The Empire Strikes Back.  Luke is dressed in an off-white outfit and has a brown weapon holster around his waist.  In his hands, he’s holding his blue lightsaber.

It’s a simple ornament, but it is a miniature ornament.  The ornament is less than two inches tall, and that’s with Luke’s lightsaber sticking up above his head.  It’s hard to imagine them including more of a scene with that scale.

And yet, the detail in this ornament is mostly fantastic.  We can see the wrinkles on his clothing, for example.  It is easy for any fan to tell who this is.

The one detail that doesn’t quite work is his face.  It’s not very well defined, and what we see only partially looks like Mark Hamill.  This isn’t a new phenomenon – regular sized Hallmark ornaments have had a hard time getting his face right as well.

Because of Luke’s stance as well as his size, this ornament doesn’t stand on its own.  Not that you’d want to set it out to display somewhere since it would easily get lost.  However, when you go to hang it on your tree, you’ll find Luke is hanging straight.

So this ornament isn’t perfect.  But fans of the original trilogy will be happy to add this miniature Luke Skywalker ornament to their collection.  I know I am.