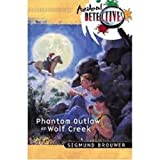 Stars: 5 out of 5
Pros: Strong mystery, fun characters
Cons: Pacing a little off early on
The Bottom Line:
Trip to Montana
Legend of a bank robber
Suspenseful and fun

Danger on a Montana Ranch

Through fits and starts, I’ve finally reached the point of reviewing here on my blog the final novel in the Accidental Detectives series, Phantom Outlaw at Wolf Creek.  I’ve read this book multiple times over the years, and this is still a wonderful read.

Ricky Kidd is looking forward to a month long vacation with his friends Mike and Ralphy at Mike’s uncle and aunt’s ranch in Montana.  The fact that he winds up bringing his younger brother, Joel, along dampens his anticipation a little, but only a little.

When he arrives, he hears the legend of a bank robbery that happened decades ago and the phantom of the outlaw that still haunts the nearby canyon.  Or is it a legend?  Mike and his visiting cousin, Sarah, insist on investigating, and Ricky sees evidence with his own eyes that the legend might be true.  Can Ricky uncover the truth of what is really going on?

This middle grade mystery series continues to be a favorite of mine.  The characters are rich and fun.  In fact, some of their pranks do slow things down early on in the book, but that is a minor complaint since I am enjoying their antics so much.

And there are threads of the mystery being introduced that early into the book as well.  You only start to appreciate that once the entire mystery has been unraveled at the end.  Meanwhile, the clues are fantastic.  I’ve read the book enough I remember where things go, but the first time I read the book, I couldn’t figure out where the clues were leading until Ricky figured it all out.  The ending is wonderfully suspenseful as well.

The series is written for a Christian audience.  Ricky’s faith is worked into the book wonderfully.  The never preaches, and those moments feel completely organic.

This series was originally released in the 1990’s, and that is very obvious.  Not only do none of the characters have cell phones, but the dates given for the bank robbery are very dated at this point.  As long as kids know that going into the book, they’ll be fine.

This series is long out of print – twice.  But it is worth tracking down.  Phantom Outlaw at Wolf Creek is a fun and mysterious read for kids of all ages.

Looking for more?  Here are the rest of the Accidental Detective Mysteries.
This review is part of this week's Marvelous Middle Grade Monday.
Posted by Mark Baker at 3:07 AM