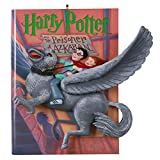 We’ve reached the third in Hallmark’s unofficial series of Harry Potter book cover ornaments.  That means the ornament is of Harry Potter and the Prisoner of Azkaban, and it’s another winner.

The ornament is inspired by the original American cover for this third book in the series.  (I believe the British cover was similar if not the same, but I don’t know for sure.)  If you are familiar with the books, you know what to expect.  Harry and Hermione are riding on the back of Buckbeat, the hippogriff.  If you turn the ornament around, you’ll see that the back cover is there, and it includes a rat scurrying away and a dementor.

What makes these ornaments fun is that the front cover is semi-3D.  In this case, Harry, Hermione, and Buckbeat are rising out of the cover.  And Buckbeat’s wing and tail, which are too big to fit on the cover of the novel, are sticking out to the right of the ornament.

The book lover in me is thrilled with these ornaments.  I don’t have a ton of ornaments representing books themselves, but I do enjoy the ones I have.  The fact that these are of the cover in 3D makes them even more fun for me.

The ornament is thick enough that you could set it out on it’s own.  And, while it is stable, I would not want it to be set out anywhere where it could be knocked around.  It could still tip over fairly easily.

Which is why I will be hanging mine on my trees.  When you go to hang it, you’ll find that it tips slightly to one side and back.  Okay, so you really have to be looking for it to see the tipping.  By the time you hang it among tree branches and lights and other ornaments, you’ll never notice.

I know I certainly am enjoying these ornaments.  Any Harry Potter fan will be happy to have Harry Potter and the Prisoner of Azkaban in ornament form on their tree.