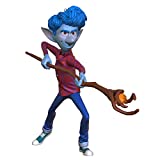 Stars: 5 out of 5
Pros: Captures Ian in action
Cons: Doesn’t stand on its own; possible that some parts could snap off
The Bottom Line:
Ian ornament
Captures magic of Onward
Will make film’s fans smile

Ian Lightfoot Offers a Touch of Magic to Your Tree

2020 saw two Pixar films released.  Unfortunately, Onward, the first one, got lost in the early closures of the pandemic when it was released in theaters in March.  However, Hallmark released Ian Lightfoot last year, an ornament tying in to the film.

If you’ve missed the movie, Ian is one of the two main characters, a troll who has just learned he has a bit of magic in him.  As such, he’s pretty easy to recognize if you’ve seen the film.  After all, not too many characters have light blue skin, dark blue hair, and pointed ears.  He’s dressed in a red flannel shirt and blue jeans.  In his hands, he’s holding his staff, and it’s got a bit of orange at the end, so magic is about to come from it.  He’s got his legs apart in the stance he has to use to cast a spell as well.

This is a classic stance for the character, and anyone who has seen the movie will recognize it right away.  Since I really did enjoy the movie, I had to get this ornament.  It captures a character I loved in action.  It’s sure to make any fan smile.

With Ian’s stance, he won’t stand on his own.  The legs are at too awkward an angle.  However, that’s not really an issue since he hangs straight.

I do want to issue a warning.  Ian is made of plastic, but I feel like he could still easily break.  His staff and legs, especially, are thin and feel like they could snap off easily.  I haven’t heard anything about him breaking, but keep that in mind.

I do hope that Onward gets the viewers it deserves video Blu-Ray and Disney+.  It’s a good movie.  Any fan of the movie will be happy they tracked down Ian Lightfoot for their ornament collection.