It's been over a month since I participated in Book Beginnings and Friday 56.  I think it's time I fixed that.

I will be highlighting Murder at Wedgefield Manor by Erica Ruth Neubauer. 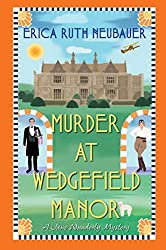 This is the second in a historical mystery series set in 1926.  As you might guess from the cover and title, we are at a stately home in England for this entry.
Here's how the book begins:

One wheel of the biplane slammed into the ground, the wings tipping precariously, before the second wheel made contact and the little plane righted itself, hustling along the soft dirt track before coming to an untidy stop.  The engine roared, the propeller a blur before my eyes.

Jumping ahead, here's a fun exchange from page 56:

"Is someone having a picnic today?"
Martha went still for a moment, before turning her thin frame toward the sink.  "Why would you ask that, Mrs. Wunderly?"
"Erm ... because of the picnic basket."

This book comes out on Tuesday, but I'll have a review of it on Wednesday.  Spoiler alert - I loved it.
Have a fantastic weekend.
Posted by Mark Baker at 12:00 AM