Time to start another week, so that means it's time to check in with a Sunday/Monday post.  I'll be linking up to:

Sunday Post
Sunday Salon
Stacking the Shelves
Mailbox Monday
It's Monday, What Are You Reading?

I actually had something different happen this week.  I went in for jury duty.  Now, this wasn't going in to my local courthouse.  This was Federal jury duty, which meant I had to go to downtown LA, which was about an hour and a half drive for me at commute time.  I was out of bed and on the road Tuesday morning before I'm used to getting out of bed these days.  (Have I mentioned how much I love working from home recently?)  I was called as one of the first twelve they put in the jury box, too.  After several hours there, during the interviewing the jury portion of the day, I was dismissed.  I was so happy because I had so much to do at work.  And I got dismissed in time to miss the worst of the traffic coming home, too.

Since that was just one day, I obviously worked the rest of the week.  Finally tackling some of the new stuff I was handed in August from start to finish.  It took me quite a while to do it.  Not fun, but I got it done.  Now to finish up the other stuff I need to do this coming week because another month end is starting on Friday.  Can you believe it is time for that already?

And I went out paddle boarding this morning.  Had to do it early because it is getting windy this afternoon and evening.  Cooler than it has been and cloudy, but the sun and the clouds were beautiful.

It's been a while, but I've been getting some new music again, which means I will have some music reviews coming soon (including this week).  I've gotten Still from Steven Curtis Chapman and Always Only Jesus by MercyMe recently, and I've been enjoying both of them.  I've got the new releases from Selah coming this next week, and I can't wait to start listening to them as well.

That was my week, so shall we get to it?

This Past Week on the Blog:

This Coming Week on the Blog: 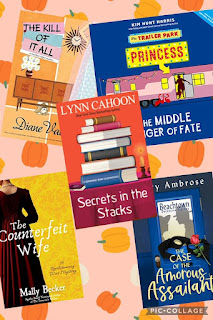 I've got another large book haul to tell you about.

We'll start off with the physical book I got - The Counterfeit Wife by Mally Becker.  I read the first in this historical mystery series earlier this year, and I can't wait to dive in and see what happens next to the characters.  It is set during the American Revolution.

I also had an ebook I pre-ordered be released this week.  The Case of the Amorous Assailant is the first in a new series from Terry Ambrose, and it sounds like it could be a lot of fun.

My request on NetGalley for Secrets in the Stacks by Lynn Cahoon was approved this week, so I downloaded that as well.

Author Kim Hunt Harris came across my radar this week.  Her Trailer Park Princess series sound fun, and since the first, The Middle Finger of Fate, was free on Kindle, I just couldn't resist.

As you've probably noticed, I'm working on catching up on the books of Diane Vallere right now, so when she put The Kill of It All, the ninth in the Madison Night series, on sale for 99 cents, I snagged it immediately.  I won't get to it until a year from now at the pace I'm going, but at that price, it can hang out on my Kindle for a while.

And, Monday night, before I started jury duty, I downloaded the audio version of The Fifth Witness by Michael Connelly from my local library. 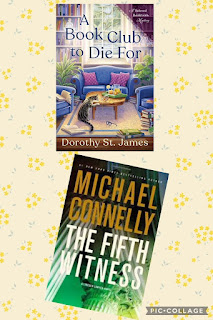 There was one problem with getting an audio book.  It is a long one (14 hours) and I only had to drive down the one day.  That left me with 11 hours left in the book to finish it up.  I'd say it's a good thing that The Fifth Witness is a relisten for me, except it's been long enough I don't remember a thing about it.  I got to 60% while listening today driving to and from the lake, but I don't know when I will be able to finish it.  I listen in fits and starts since I work from home, but I will get there.

I'm also about to start A Book Club to Die For, the third Beloved Bookroom Mystery from Dorothy St. James.  I really enjoyed the first two books in this series, so I'm looking forward to diving in.

I believe that's it for me.  Hope you have a great week.

Email ThisBlogThis!Share to TwitterShare to FacebookShare to Pinterest
Labels: its monday what are you reading, mailbox monday, stacking the shelves, sunday post, sunday salon