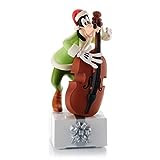 Stars: 5 out of 5
Pros: Nice touch when mixed in with the rest of the band
Cons: Not quite as good on his own as everyone else
The Bottom Line:
The base of the band
Goofy and his bass provide
Musical backbone

Every band needs a bass player.  Okay, so it depends on the band, but for the Disney Wireless Band, it certainly proved to be true.  And that bass player just happens to be Goofy.

Now if you are thinking of a bass guitar, you’d be wrong.  Goofy has himself a traditional upright bass, you know, the kind that look like a viola and you stand up to play.  And sure enough, he is standing holding this instrument.  This makes Goofy the tallest of the band, but not by too much.  It only has four strings to it, and he plucks them.  Well, he would anyway if they and he weren’t just plastic, but the way he swings his arms back and forth to the music that he’s playing, that’s the effect he’s supposed to have.  He swings he body from side to side, and each hand touches the neck of his bass at the end of the arcs.

Obviously, Goofy provides the base of all ten songs that this band plays.  And he does a good job of it.  You can hear it in there, but it’s not overpowering.  It completes the sound without diminishing anything that the rest of the band is doing.

And, just like everyone else in the band, Goofy starts two songs on his own.  He plays a few notes before everyone comes in full force.  His too songs are "O Christmas Tree" and "We Wish You a Merry Christmas."  His solos at the beginning are more introductions that the first few notes of the song, but they sound nice and when the other band members come in, the songs sound great.  He does get another solo at the end of "O Christmas Tree" which is fun.

As with the others, Goofy runs on three AAA batteries that fit nicely into the silver package base he and the bass are standing on.  They have lasted me this Christmas season just fine, although the more you play with them, the quickly they will drain, obviously.

While I am obviously enjoying this set, I would say that out of all of them, Goofy is the one that would hold up worst if left on his own.  Each of the other two members sound good playing solo, but the bass isn't designed to be a solo instrument.  He's good, but he's not as much fun on his own.  Really, you should just get the entire set anyway, so it doesn't matter, but that's my one thought with Goofy.

The stand up bass is not something I would have pictured as part of a wireless band like this, but Goofy playing the bass adds a nice note to the Disney Wireless Band.  On his own, he’s good, but mixed in with the rest of the band, he’s great.