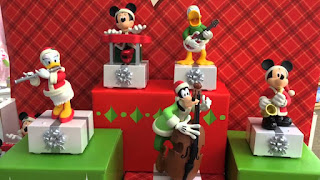 Get the Whole Gang Together for This Fun Wireless Band

Hallmark loves their wireless band.  In the four years I've been collecting, they've released four different bands.  And, collector that I am, I have two of them.  Two years ago, I bought the Peanuts band.  And this year, I bought the Disney Wireless Band.  No, I didn't need both.  But I sure have been enjoying Mickey and friends.

These pieces are bigger than your typical ornament.  They stand several inches tall and each character is on a separate silver package.  There is no hook to hang them, so they are designed to be displayed on a shelf or a floor.

The five Disney characters in the band are Mickey Mouse, Minnie Mouse, Donald Duck, Daisy Duck, and Goofy.  Each has a separate instrument, and when you press a button on one member of the band, they all start to play along.  That's what makes them so much fun, and that's the reason to buy all five of them.  Each member of the band starts two songs, so when you have all five pieces, they play 10 songs total.  To interact, they need to be within a three foot circle.  I thought the band in previous years could be further apart than that, but since I like to display a band under one of my Christmas trees, that isn't an issue for me either way.

What songs are included?  You've got such classics as "Jingle Bells," "Deck the Halls," "Twelve Days of Christmas," and "O Christmas Tree."  The only religious song included is "It Came Upon the Midnight Clear."  And on the rarer side are "Nutcracker March" and "Carol of the Bells."  While those aren't songs I would have expected to hear from the set, I love them.  In fact, they are my favorites of the songs that are played.

All the instruments played are electronic versions, but they still sound good.  At various times, you can really hear all the instruments in the band playing, and at others they are supporting background.  The combination is wonderful.  The songs only last about 20 seconds apiece, but they are worth it.

The arrangements of the songs are fun mostly jazz.  They are different than we heard on the Peanuts Wireless Band, so that makes it worth better.  All the songs are recognizable but fresh at the same time.  Once you've listened to it, you'll understand.

To start the band playing, hit the button on any member.  That member starts one of his or her two songs, and the others join in after a second or two.  Hit that member's button again to hear the other song, or hit a different character to hear something else.  Another option is to get the characters playing in concert mode.  There, they start a new song after 30 or 40 seconds and rotate through all 10 songs.

In addition to the music, the characters move in time to the music.  They just rock back and forth, but it is a nice addition.  Minnie on her keyboard and Daisy on her flute really get into the songs.  You need to make sure they are located on a secure surface because they rock enough that they scoot.  I put mine on the floor under my tree, and they have stayed in place there no problem.

Each member of the band operates on 3 AAA batteries, and the first set came with the pieces.  How long the batteries last depend on how much you use them.  Just playing them occasionally, the batteries have lasted me all year with no problem.  Of course, if you play them on concert mode, the batteries would drain much more quickly.  The batters fit into the bottom of the package base no problem.

These have been a fun addition to my Christmas decorations this year, and I know I'll enjoy the Disney Wireless Band for years to come.  Snag these however you can because you'll enjoy them, too.
Posted by Mark Baker at 12:24 PM