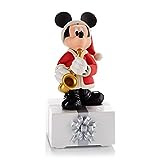 Stars: 5 out of 5
Pros: Two more fun songs and a sax
Cons: None for me
The Bottom Line:
The last band member
Mickey and sax add to joy
Complete set with him

Mickey Rounds Out the Band with Two Classics and a Sax

You can’t have a band made up of classic Disney characters without featuring Mickey Mouse.  I think it’s a law or something.  Hallmark made him the final entry in their Disney Wireless Band in 2013, but that certainly doesn’t make him least.

Mickey’s two songs to start are two obvious choices, “Deck the Halls” and “Jingle Bells.”  Both are presented in fun, jazzy versions that last about 20 seconds or so.  What’s makes this band so much fun is how they interact when you start one playing, and I love that here, too.  It’s especially fun on “Deck the Halls” since near the end, Mickey will start a phrase and then the rest of the band will answer it.  Everyone holds still when they aren’t playing.  It’s a great piece of programming.

Of course, Mickey adds his sax to the other members of the band as well.  At times he really shines here, too, at other he takes a back seat.  Either way, you’ll enjoy listening to him play along with the others.

Each member of the band requires 3 AAA batteries to operate, and these batteries fit quite nicely in the present they are standing on.  It’s a nice way to disguise what they are really doing.

I’ve been enjoying my band all month long, and I plan to enjoy it for years to come.  Mickey Mouse was a great conclusion to the fun series, and if you don’t have him yet, track him down today.