Ornament Review: Snug Fit for Santa - Once Upon a Christmas #3 - 2013 Hallmark Ornament 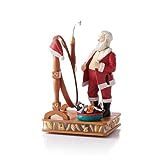 Stars: 3 out of 5
Pros: Santa's voice and the music
Cons: While detailed, a little plain overall
The Bottom Line:
Sounds saves otherwise
Average ornament that
Die hards will still buy


Plain Look for This Year's Once Upon a Christmas

It was two years ago that I started collection Hallmark's Magic Cord ornaments.  That year, they had a Peanuts one, a Disney one, and they started a fun series called Once Upon a Christmas that features Santa getting ready for his yearly trip.  Snug Fit For Santa is the third in this series, and it's a bit weak compared to others in the series.

The ornament features Santa standing in front of a mirror.  And yes, it really is a mirror.  He's trying on his jacket for the year and finding it's shrunk while he wasn't wearing it.  (I know how he feels).  His hat is hanging from one of the posts of the mirror.  On the floor at this feet is a kitten in a basket holding a slipper, reminiscent of one of the entries in the Mischievous Kitten ornament series.

Now don't get me wrong, I do like what is here.  The details on Santa and the kitten are great, and you can see the wood grain in the stand for the mirror.  But the others have had more detail and more things to look at.  I just can't help feeling that this one is rather simple and plain.

The lights on this ornament reinforce that.  There are some around the base like there have always been for this series.  The only light on the ornament itself is on the mirror.  I do like it since sometimes the entire mirror lights up and sometimes only part of it does.

Here this ornament continues to redeem itself is the sound.  You do have to plug this into Hallmark's magic cord (sold separately), to get the lights and sound to work.  Once it's plugged in, hit the button behind Santa.  And you get 15 seconds of him thinking about skipping the cookies kids leave out for him this year (but ultimately deciding not to) and then an instrumental version of "Here Comes Santa Claus" plays for 45 seconds.  They voice they've gotten to play Santa here is perfect, and the music is great as always.  That part makes me glad I still bought the ornament.

All of the ornaments in this series have had nice flat bases, and this one is no exception.  You can leave it out to enjoy on a shelf or mantel no problem.  You'll also find Hallmark's series marker (in this case a 3 in a Christmas tree) on the bottom.

If you want to hang the ornament, you'll find the hook coming up from an arm attached to the other post of the mirror.  The ornament doesn't quite hang straight, but by the time you get it snuggled in some tree branches, you'll never know.  This ornament is heavy, so you'll definitely want good hooks and a strong branch for this one.

While definitely not a standout in the series, the sound element is still fun.  Those who collect the series will want to get Snug Fit For Santa, but it won't entice anyone else into starting the series a little late.

And check out the rest of the Once Upon a Christmas series.