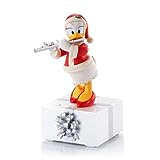 Daisy and Her Flute Are My Favorite Entry in the Band

While I like all the members of the Disney Wireless Band, there is one that is my clear favorite - Daisy Duck, who is playing a flute.  And it might not be for any reason you’d think.

Looks wise, she fits in perfectly with the rest of the band.  Like everyone else, she is wearing a Santa hat, and like Minnie, she has a bit of holly attached to the front.  She is wearing a red Santa coat as well and red heels, so she looks very festive.

The reason I love Daisy is because of the songs she plays.  She has the distinction of leading “Nutcracker March” (and if I knew The Nutcracker better, I could tell you which song it was) and “Carol of the Bells.”  Neither song is that long (right around 20 seconds), but they both sound great.  The flute is very pretty as it starts both of these songs, and when the other members of the band join in, they sound great.  “Carol of the Bells” is a favorite because of the drama, and it sounds perfect here.

Naturally, Daisy adds her flute to the other eight songs her band mates start as well.  It’s a high, lilting sound and compliments the other songs perfectly.

Daisy has something else in common with Minnie besides the mistletoe and red jacket.  According to friends, she will also scoot as she whips back and forth playing her flute.  I’ve only had her on the floor under my tree, so I haven’t seen it for myself, but it is definitely something to watch out for.

Each member of the band requires 3 AAA batteries to operate successfully.  The first set comes with the piece, and mine have lasted me all December.  I don’t play them that often, so your battery life may vary.  The batteries fit nicely in the bottom of the base that Daisy is standing on, which is made to look like a silver package.

When I do play with the band, I have a lot of fun.  The arrangements are entertaining and watching the members interact is great.  I have all of mine next to each other under my tree, but if you spread them around a room, they’d sound even better.

And Daisy Duck's songs are a true treat in the band.  I start her more often than the others because I love listening to her and the rest of the band interacting.  This is one worth tracking down first.