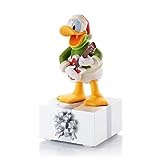 Donald’s Rocking Out on His Guitar

When I first learned that Hallmark was doing a Disney Wireless Band, I wasn’t sure which character would wind up with which instrument.  However, when I saw Donald Duck with a guitar, I felt it was perfect.  I can just picture the angry duck as a guitar playing rock star.  And the final piece is just as good.

Like all the other members of this band, Donald is on a stand that is painted to look like a wrapped package.  It’s just a box with silver on it and a slightly darker shade for the ribbon and bow, but it looks nice.  This box actually houses the 3 AAA batteries needed to operate Donald, but it looks festive, too.

Donald is holding an electric guitar and looks ready to rock out this season in his green shirt and green scarf.  My only complaint with him is that he has his mouth open.  If you set him on a stand, all you really see is that open mouth.  However, since I have mine on the floor underneath my Christmas tree, that isn’t an issue.

When you press the button on the base, Donald alternates between two songs - "It Came Upon a Midnight Clear" and ""Up on the Rooftop."  While the first song is good (and the only religious song in the band), the second is a ton of fun.  It's got a retro rock feel to it and almost sounds like a Beach Boys song as it starts.

Of course, the joy of this wireless band is watching them all interact.  If you buy all five members, they will combine to play a total of ten songs.  Donald’s guitar is an important part of all of them, and he sure seems to enjoy himself as he plays.  I love the way he rocks back and forth to the music.

These guys are just fun.  I enjoy pushing a button at random and listen to everyone play along.  And if I have fun, imagine how much fun kids would have with the series.

Unfortunately, they’ve proved to be popular and are very hard to find at this point.  Then again, we are almost to Christmas.  So if you are interested, start searching now.

And I recommend you do because this is a band I will be enjoying for quite some time to come.  Donald Duck on his guitar is just part of the fun from the Disney Wireless Band.