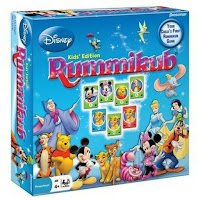 Stars: 5 out of 5
Pros: Simpler rules yet still fun for all ages
Cons: None
The Bottom Line:
Line up all the tiles
Disney characters to help
Hours of fun for all

Adding Some Disney Magic to a Fun Tile Game

A couple years back, I learned about the Disney version of Rummikub aimed at kids 4-8.  Since my family (my mom especially) loves the full game, I filed it away to get for my niece when she was old enough.  Fortunately, Uncle Mark remembered it when it came time for her fourth birthday, and it has been a huge hit.

The game comes with cardboard “tiles” that need to be punched out.  Once that is done, you have four sets of the numbers 1-10 in four different colors plus two wild cards.

As you might expect from the rummi part of the name, the point is to play all the tiles in your hand on the table.  You start with seven tiles.  There’s no initial meld, and you can play in groups of two or more either in a run (1,2,3 all one color) or a group (two 5’s of different colors).  And if you can build on what someone else has played on your turn, you can do that.  If you can’t play, you have to draw, and that ends your turn.

That’s the basic rules.  As your child conquers that, you add the wild cards to the game.  From there, you go to sets of three or more.  Once they’ve conquered that, it’s time to advance to the full version.

The one thing those familiar with the fame will notice is missing from the regular version is the rearranging of tiles.  While it’s not in the rules, we introduced it to my niece, and she does a great job with that, too.

So what makes this Disney?  In addition to the number, a different Disney character is on each tile.  You get the likes of Mickey, Simba, Snow White, and Pooh.  If your child still doesn’t quite have numbers, they can match characters.

I live several hours from my niece, so I wasn’t able to play this game with her at her birthday, but I’ve been hearing how much she loves it and how good she is at it.  I finally got to see for myself at Thanksgiving, and it’s the truth.  She occasionally needs some help missing what is right in front of her, but there were times I missed things she spotted.  And she beat me a couple of times with no help at all.  If this is how well she plays at 4, she’s going to be a force to be reckoned with when she moves to the adult version.  And, unlike some games for kids, this one was very fun for me, too.  My niece completely unsolicited thanked me for it a couple of times.  That to me is a good sign that it is a hit.

So if you are looking for a good game for the kid in your life, Disney's Rummikub will fit the bill quite nicely.  Everyone will enjoy it.
Posted by Mark Baker at 12:06 PM