My Favorite Books Read in 2020 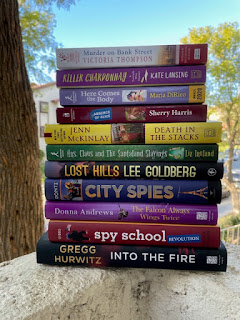 We are already ten days in 2021.  Can you believe it?  That might make me the last person to get a list of their favorite books read during 2020 published, but I'm going to fix that today.

As a reminder, I list these books in the order I read them.  And these are the books that stood out to me as I went over all the books I read during the year.  There were plenty of 5 star books I read this year that almost made the list, so feel free to browse through my book or monthly summary categories over on the left hand side to see what all I read.  While most of these books were published in 2020, there are a couple of older books on my list.  If I read it for the first time in 2020, it qualifies for this list.

With that out of the way, here's the list.  The link will take you to my full review.

I read several of the Gaslight Mysteries this year in an attempt to catch up, and I rated all of them 5 stars.  But this one stood out to me since it wrapped up a major storyline we'd been following for 10 books, and it did it in a very satisfactory manner while developing the characters.

Microphones and Murder by Erin Huss

The first of several books by new to me authors on my list this year.  I loved the characters, and the mystery kept me guessing until I reached the end.  Plus the podcasting aspect was something different from other cozies I read.  The second was just as much fun as the first.

A cozy set in New York City with some characters who are in the mob.  Yes, you read that right.  It works in this delightful series debut.  You have time to read this one before the sequel comes out in February.  I'm really looking forward to seeing what comes next for these characters.

The Secrets of Bones by Kylie Logan

This series sits on the line between cozy and traditional.  The first one made my list last year, and this year's entry was just as strong.  The main character owns a cadaver dog, which sets the series apart from many I read.  I loved the premise of this one and how it unfolded.

A debut author to watch.  This book had a great mystery and complex characters brought to life by sub-plots that never took the spotlight from the mystery.  I have an ARC of the second on my review list this month, and I have very high hopes for it.

Donna and her character, Meg Langslow, are familiar entries on my list.  This is book twenty-seven in the series, after all.  And it is the series at it's best.  A strong mystery, charming characters, and plenty of laughs.  There are a lot of things going on in this book, and they are all balanced perfectly.

Death in the Stacks by Jenn McKinlay

I read several of Jenn's books this year, but this one stood out to me.  Yes, I am still behind in the Library Lover's series, but I had such a blast watching the characters from all three of her mystery series interacting here.  If you are a fan of Jenn's and you haven't read this book yet, you need to fix that just for the cameos.

Mrs. Claus and the Santaland Slayings by Liz Ireland

A cozy mystery set at the North Pole at Christmas?  I couldn't pass that up.  It delivered everything I was hoping it would.  There's a bit of fantasy (we are dealing with Santa and elves, after all), but the author does a great job of bringing it all to life.  I'm looking forward to the second book coming later this year.

Cake Popped Off by Kim Davis

This is the second book in a series, and it took the set up from the first book and paid it off in spades here.  I'm really growing to love the characters, and I'm dying to know how what happened in this book is paid off as the series continues.

Absence of Alice by Sherry Harris

Sherry Harris is another regular on my list.  Her latest Sarah Winston Garage Sale Mystery is not to be missed.  This is a cozy with a thriller edge that grabbed me and didn't let me go.  Meanwhile, we've got the usual cast of fantastic characters we love.

I've been reading Lee's books for years.  This is the most serious book from him I've read, but that didn't make it any less good.  As always, he captures me with the plot and brings his characters to life expertly.

Into the Fire by Gregg Hurwitz

Each book in the Orphan X series gets better, and 2020's book was no exception.  This is a thriller with fully developed characters you can't help but root for.  I seriously can't recommend this series strongly enough.

I'm so glad I stumbled upon this book this year.  Action, mystery, and wonderful characters.  The book is filled with heart, and I am looking forward to the sequel this year.

The previous book in this series wrapped up a major arc, so I was curious to see how Ben's life would advance.  This one throws in a conspiracy going back to the days of the Revolution and incorporates the humor and thrills fans expect.

Email ThisBlogThis!Share to TwitterShare to FacebookShare to Pinterest
Labels: book