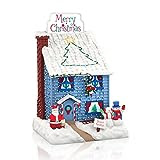 Stars: 5 out of 5
Pros: Fun lights, lots of detail, good MP3 player
Cons: Price is a little high, but a decent value for what you get
The Bottom Line:
Festive light display
Timed with playing Christmas songs
Creative and fun


Deck Your House with This Fun Table Top Display

Two years ago, Hallmark released a Magic Cord ornament that is still my favorite in that line.  So when they announced plans for a table top display version of Deck The House!, I knew I had to resist.  And I did – until I pressed the button on it once.  Fortunately, I was able to win a version because I might have bought it.  It really is that much fun.

If you’ve seen the ornament of the same name, you’ll find this piece is actually the same thing.  And if you’ve missed it, the piece was inspired by the viral video a couple years back of a super decked out how where the lights lit up to the tune of Manheim Steamroller’s version of “Carol of the Bells.”  This piece features a blue house with a huge “Merry Christmas” sign on the roof.  There are strings of lights going down the roof and three of the sides of the ornament.  The windows have scenes painted in them.  There is a Santa and two snowmen out front on either side of the walk.  And the house must not be finished yet since someone was still putting lights up.  The ladder has fallen on the ground, and the person is dangling from the roof by some lights.

And let me tell you, this thing lights up.  All of the lights (obviously) light up.  There are lights in the windows, which can light up by themselves.  And Santa and the snowmen light up independently as well.  Oh, and the lights?  They blink red, green, white, and blue (a step up from the ornament, which just featured white lights).

Then there’s the sound.  Like the ornament, this piece features a fun rock version of “Carol of the Bells,” and the lights flash on and off, putting on a synchronized show.  But that’s not all.  This table top piece actually has four songs pre-programmed in.  The other three are “Deck the Halls,” “Joy to the World,” and “The Nutcracker.”  Each piece lasts about 30 seconds, and the lights are perfectly synced.  It’s a wonder to watch and pretty mesmerizing.

But that’s not all.  This will also play the music from any MP3 player.  There’s a short earphone cord out the back, and when you plug it in and start playing music, the lights will pulse on and off to the music.  It’s not nearly as synched as the pre-programmed songs are, but it is a lot of fun still.  And rather addicting to watch.  Trust me on this, okay?

Obviously, the piece needs power to operate.  It comes with a wall cord, or you can use 4 AA batteries (not included) to power it.  I haven’t used the batteries, but the power cord works great.

Let’s talk controls.  On the right hand side of the piece, there is a button and a knob.  You turn the knob to turn on the player and adjust the volume.  This thing actually has fairly decent sound volume.  I’ve been impressed by it, anyway.  The button is used to start the four pre-programmed songs, which rotate through in order.

Now, here’s where it gets a little quirky.  When the piece is plugged in to electricity, you can half a continuous light display, where the piece just flashes the various lights.  (This feature does not work on battery power.)  However, to do that, you need to have the knob for the sound turned off.  If you leave the MP3 player turned on, only the snowmen will light up, and they will stay lit.  Also, when you are using this as a music player, it has a hard time registering slow, quiet songs for the light display.  I think it goes off the base for the lights because any time I notice a slower song starting, that green snowman is just staring at me for the first 10 or so seconds.  It finally starts to fully light up as the song progresses.  However, any song that starts out quickly, the piece lights up right away.  Finally, both sides of the house have lights that don’t like up.  The reason?  Those are where the speakers in the piece are.

The piece sits on a base that is almost square.  It’s 5 inches by 6 inches.  It’s also almost 10 inches high.  It’s still small enough you can find several places to display it, but also large enough that you’ll be able to enjoy the detail and the lights.  The snow around the house on the base is also covered in glitter, which adds a nice touch.

I don’t tend to use a speaker system much, usually just using my computer to listen to music at home.  But that will definitely be changing around Christmas.  I love Deck The House! and I plan to find a place to enjoy it year after year.